Just how much does Ithaca charge for tuition today, and how much is tuition expected to change? How do these charges compare to other schools? Keep reading to find out.

Get a good understanding of the tuition charges associated with Ithaca so that you can prepare yourself successfully for 4-6 years. Check out the figures following to understand how Ithaca College's cost compares to other colleges and universities and if you should plan for tuition increases.

How Does Ithaca College Measure Up To Other Schools?

The following table outlines how Ithaca measures up to other schools nationally, regionally and by state.

How Much Will Tuition & Fees Be for Ithaca?

Unlike public colleges, Ithaca does not offer a tuition discount to students who live in state.

Ithaca College tuition and fees is the amount billed to students for one academic year, not including room and board. Having said that, most students end up having to pay below full tuition after receiving financial aid and other rate reductions.

How much does Ithaca cost per credit hour?

There has been a rise of 2.8% in Ithaca College tuition and fees for out-of-state students in the past 5 years. Tuition grew by 2.8% and fees grew by 0.0%. This year, students should expect to pay $44,063 based on current projections.

Due to price increases, the full cost of a four-year Ithaca degree will be $183,658, and the full price of a two-year degree would be $89,338, which doesn't include additional costs for books, transportation, and room and board.

The following chart shows predicted future tuition and fees for undergraduates at Ithaca. 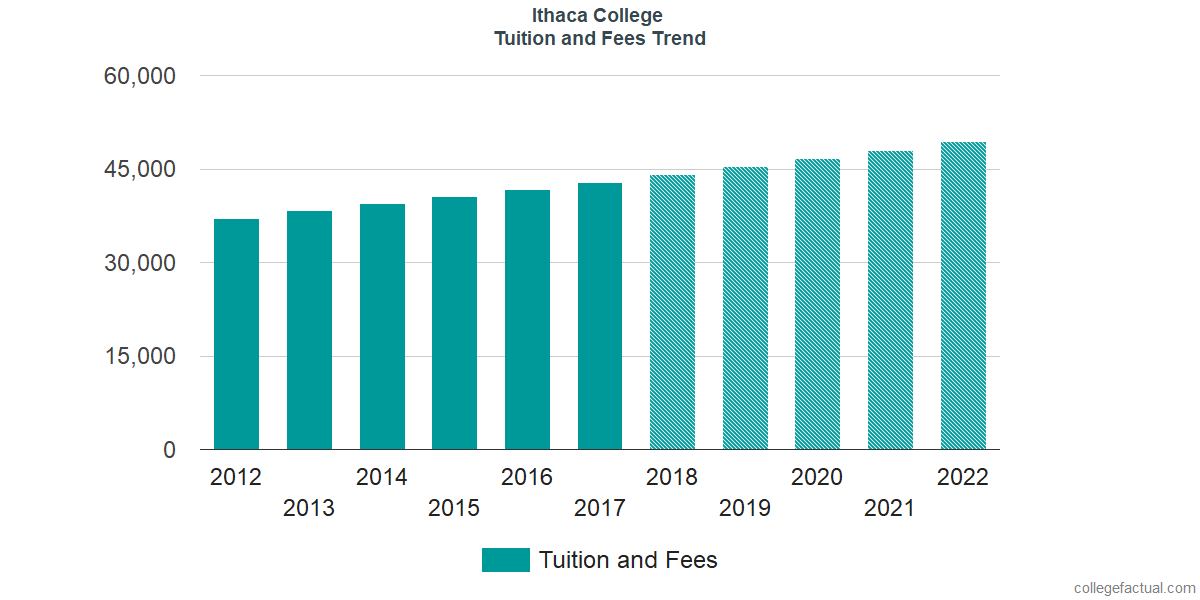 Do Not Discount Price Increases

Due to inflation and other variables, the price of college tends to increase every year. For this reason your final year of college could be much more expensive than your first year.

Discover our answers to frequently asked questions and get more information about college tuition and fees.

Continue Your Research on Ithaca