A Physics Major studies the fundamental laws of nature from gravity, to water's boiling point. As you move through your studies, you will be introduced to complex problems and use mathematical equations along with experiments to understand how things work in the natural world. Classes in topics such as mathematics, computer science, electricity and magnetism, modern physics, thermodynamics, and quantum mechanics will teach you Physics concepts, such as energy and relativity.

Physics is a large field and can be broken down into multiple areas of specializations. Depending on your college, you may have the option to choose a concentration in Atomic and Molecular Physics, Elementary Particle Physics, Plasma and High-Temperature Physics, Nuclear Physics, Optical Sciences, Condensed Matter and Materials Physics, Acoustics, or Theoretical and Mathematical Physics.

Physics was the 67th most popular major in the 2018-2019 school year. Colleges in the United States reported awarding 13,927 degrees in this year alone. This is approximately the same as the 13,815 graduates the prior year.

Approximately 819 colleges in the U.S. offer a physics degree of some kind. This year's Best Colleges for Physics ranking compares 28 of them to identify the best overall programs in the country. Explore this or one of our many other custom physics rankings further below. View the 2021 Best Colleges in Physics

What Are The Requirements For a Degree in Physics

Physics classes involve very advanced mathematical formulas. Students should be prepared to use complex mathematic equations to solve problems and answer questions. Strong critical thinking and analytic skills will allow you to create innovative experiments and ensure necessary accuracy. Since you will be working with others, teamwork and communication skills are also important in this field.

Most Physics jobs require you to have at least a master's degree. Those who are interested in performing advanced research or holding permanent jobs at universities, labs, or government offices will need to earn their Ph.D. While working towards an advanced degree, some students pursue internships or attend summer field camps. This allows them to gain experience in the field and be more competitive in job market after graduation.

physics degree applicants generally need have finished high school or their GED. Many schools may also have GPA and SAT/ACT score minimums that must be met. Once you obtain your degree, additional physics certifications required to pursue a career in this field.

There are various different levels of physics degrees. Physics programs offered by schools range from a associate's to a research/scholarship based doctorate, which is the highest physics degree you can get. Depending on the physics degree you choose, obtaining your diploma can take anwhere from 1 to 4+ years. 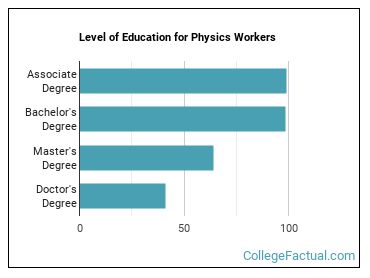 The education level required is different depending on the physics career you are seeking.

Physicists who pursue an advanced degree are hired in multiple industries including scientific firms, as professors at colleges, or government offices. NASA and the U.S. Department of Defense often hire physicists. Positions as secondary school physics teachers or as research assistants are available for students who obtain their bachelor's degree.

Want a job when you graduate with your physics degree? Physics careers are expected to grow 7.8% between 2016 and 2026.

The following options are some of the most in-demand careers related to physics.

How Much Money Do Physics Grads Make? 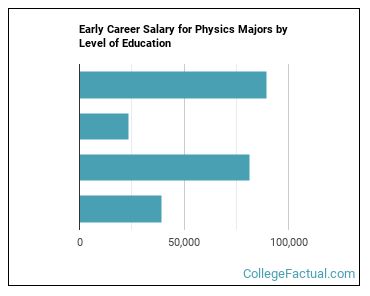 Salaries for physics graduates can vary widely by the occupation you choose as well. The following table shows the top 5 highest paying careers physics grads often go into.

Getting Your Physics Degree

With over 1,801 different physics degree programs to choose from, finding the best fit for you can be a challenge. Fortunately you have come to the right place. We have analyzed all of these schools to come up with hundreds of unbiased physics school rankings to help you with this.

Physics is one of 7 different types of Physical Sciences programs to choose from.