Political Science is an ancient discipline that has evolved and adapted to current societal needs. A major in Political Science and Government will teach you about political and government principles and how they affect our educational system, workplaces, and communities. This is a diverse major that covers a lot of information using scientific and humanistic perspectives. Issues will range from voting behavior to revolutions to public policy. You may also look at politics outside the United States and explore issues from different regions around the world.

Some of the classes you can expect to come across are comparative government, United States foreign policy, contemporary political ideologies, gender and politics, legislative process, public policy analysis, political theory, and judicial processes.

Political Science & Government was the 21st most popular major in the 2018-2019 school year. Colleges in the United States reported awarding 47,035 degrees in this year alone. This is a difference of 2,384 over the prior year, a growth of 5.1%.

The United States has 1,220 different schools where you can get a degree in political science and government. This year's Best Colleges for Political Science & Government ranking compares 367 of them to identify the best overall programs in the country. Explore this or one of our many other custom political science rankings further below. Your studies will involve a lot of research papers and group projects mean to teach you strong writing and oral communication skills, as well as the ability to cooperate with others. Class discussions and presentations will also be part of your work. Be prepared to analyze an issue from multiple points of view, as well as defend your own opinions. You should be confident and ready to provide data and examples to back up a point.

Students will also need to be flexible and work under pressure to meet deadlines or participate in heated debates. You should be comfortable utilizing different research methods to find and analyze data and come to conclusions. Research will include everything from ancient philosophy to current ideas on homeland security.

New students will need to have completed high school or a GED program and each school will have their own minimum GPA and SAT/ACT test requirements. In addition to these basic political science and government program qualifications, to serve in some political science careers, special certification may be required outside of your degree.

A doctor's degree (research / scholarship) is the most common level of education achieved by those in careers related to political science, with approximately 41.0% of workers getting one. Find out other typical degree levels for political science workers below. 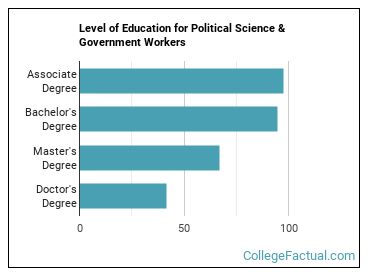 The education level required is different depending on the political science career you are seeking.

Political Science and Government is a broad major that prepares graduates for a number of different occupations. The most obvious choice is working for the government or becoming a politician. However, you can also become a political consultant, diplomat, or lobbyist. Working in congressional research is another option. This degree also prepares you to go into graduate studies in business or law.

Want a job when you graduate with your political science degree? Political Science & Government careers are expected to grow 8.0% between 2016 and 2026.

The following options are some of the most in-demand careers related to political science and government.

How Much Money Do People With a Political Science Degree Make?

Political Science & Government graduates between 2015-2017 reported earning an average of $33,977 in the 2017-2018 timeframe. Earnings can range from as low as $20,000 to as high as $82,800. As you might expect, salaries for political science graduates vary depending on the level of education that was acquired. 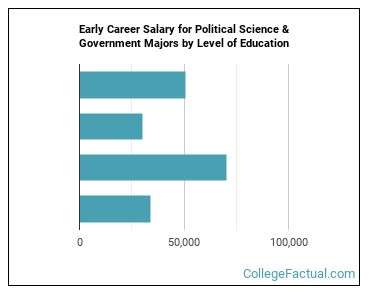 Getting Your Political Science & Government Degree

With over 2,472 different political science degree programs to choose from, finding the best fit for you can be a challenge. Fortunately you have come to the right place. We have analyzed all of these schools to come up with hundreds of unbiased political science school rankings to help you with this.

One of 13 majors within the Social Sciences area of study, Political Science & Government has other similar majors worth exploring.