If you've ever wanted to build a robot or create a computer you can have a conversation with, Computer Science might be the major for you.

Computer Science was the 19th most popular major in the 2019-2020 school year. Colleges in the United States reported awarding 53,722 degrees in this year alone. This represents a 11.7% increase in compsci degrees awarded over the prior year's total of 47,463.

Approximately 968 colleges in the U.S. offer a computer science degree of some kind. Our 2022 Best Computer Science Schools ranking analyzes 502 of these schools to determine the best overall colleges for computer science students. Continue reading to check out one of our many unbiased rankings of compsci programs later in this article. 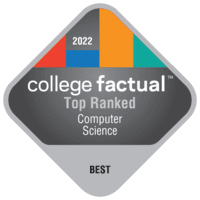 What Are The Requirements For a Degree in Computer Science

Computer scientists often have a background in mathematics and enjoy problem solving. You will be responsible for creating programs and computer systems that will assist humans with projects or complex computing problems. Successful computer scientists are able to work as part of a team, have strong critical-thinking and analytical skills, and have ingenuity and creativity.

Most computer scientists work full time with a typical 40-hour workweek. However, when conducting research, computer scientists are able to set their own hours, which may be more flexible. Internships and summer jobs within the field will be beneficial since employers are looking for employees with concrete skills.

computer science degree applicants generally need have finished high school or their GED. Many schools may also have GPA and SAT/ACT score minimums that must be met. Specific compsci careers may require a certain level of degree attainment or additional certifications beyond that.

CompSci degree levels vary. You can spend many years getting as high as a in computer science to something that takes less time like a . Computer Science programs can take anywhere between one to four or more years for a full-time student to complete.

77.9% of compsci workers have at least a bachelor's. The chart below shows what degree level those who work in computer science have obtained. 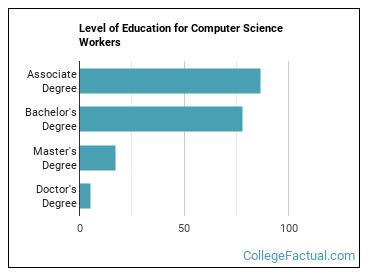 This of course varies depending on which compsci career you choose.

There are multiple routes that Computer Science graduates may choose. Previous graduates have gone on to work for computer system development companies, software publishers, research and development companies, and the federal government. This major equips students with the skills to pursue any career that deals with interactions between humans and computers. Those who want a career in computer and information research will have to earn their Ph.D.

Want a job when you graduate with your compsci degree? Computer Science careers are expected to grow 15.7% between 2016 and 2026.

The following options are some of the most in-demand careers related to computer science. 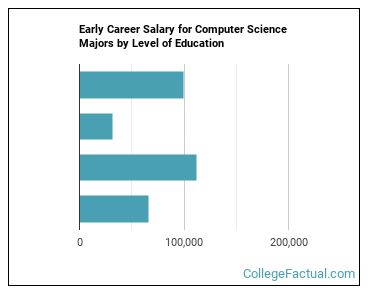 Salaries for computer science graduates can vary widely by the occupation you choose as well. The following table shows the top highest paying careers compsci grads often go into.

Getting Your Computer Science Degree

With over 1,664 different compsci degree programs to choose from, finding the best fit for you can be a challenge. Fortunately you have come to the right place. We have analyzed all of these schools to come up with hundreds of unbiased compsci school rankings to help you with this.

One of 10 majors within the Computer & Information Sciences area of study, Computer Science has other similar majors worth exploring.