What is the Cost of Living at Alcorn State University ?

Are you aware of just how much it will cost to live on campus? Consider just how much extra the cost of living is at Alcorn State University .

Alcorn State Housing and Meal Plan Costs Alcorn State prices housing and dining separately. The on-campus housing charge for a typical student was $7,360 in 2021, and the price of a typical dining plan was $3,427.

Find out Alcorn State University costs for both on-campus and off-campus housing, in addition to dining plans in addition to other charges in the the next table.

Planning on Spending Four Years in the Dorms? Forecasted Cost is $61,039

In the past five years, Alcorn State housing and dining costs have adjusted 1.7% per year on average, compared to a nationwide average change of 2.4%. Incoming first year students in 2022 can expect to spend around $15,437 for room, board and other costs based on current movements. Associate degree students will likely pay somewhere around $15,289 in their final year, while those pursuing a bachelor's degree are going to pay about $15,125 in their final year. 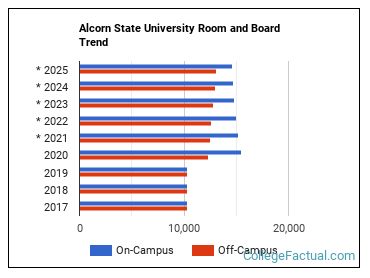 How to Finance Your Alcorn State Education?

Answers to Questions About Living on Campus at Alcorn State

Are you wondering whether you may be required to live on campus? If you are a first-time full-time student, some schools may require it. See the table below to find out whether Alcorn State does or not, as well as the on-campus housing capacity.

Campus Costs are Average Compared to Other Schools

Room, board, books, supplies, and other expenses for on-campus students at Alcorn State University total to $15,636, similar to the nationwide average of $15,282. 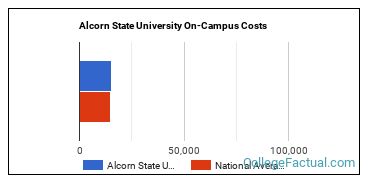 If you’re considering Alcorn State University, here are some more schools you may be interested in knowing more about.

Curious on how these schools stack up against Alcorn State? Pit them head to head with College Combat, our free interactive tool that lets you compare colleges on the features that matter most to you!