Just how much does Bucknell charge for tuition today, and how much is tuition estimated to change? How do these charges compare to other schools? Keep reading to find out.

Plan economically for your college degree. Compare Bucknell University's tuition charges to typical colleges and universities. Check for tuition tendencies and potential increases to find out if you should budget for more resources for the next four years of tuition.

Bucknell Tuition Prices Versus Other Schools

The following table outlines how Bucknell measures up to other schools nationally, regionally and by state.

How Much Will Tuition & Fees Be for Bucknell?

In the 2019 - 2020 academic year, full time undergrads at Bucknell paid $58,196, before adjustments for financial need. Of this amount, the expense of tuition totaled $57,882. The other $314 represents additional fees. Find out more about the net price.

In contrast to public colleges, Bucknell does not offer a tuition discount to students who live in state.

Bucknell University tuition and fees is the sum billed to students for one academic year, and doesn't include room and board. Then again, many students will end up paying below full tuition after receiving financial aid and other rate reductions.

Check out the Cost Per Credit Hour page to learn more.

There has been a rise of 3.6% in Bucknell University tuition and fees for out-of-state students in the past 5 years. Tuition grew by 3.6% and fees grew by 3.6%. This year, students should anticipate paying $60,297 based on current estimates.

Because of price increases, the full cost of a four-year Bucknell degree will be $254,565, and the full expense of a two-year degree would be $122,770, not including other costs such as books, transportation, and room and board.

The following chart shows estimated upcoming tuition and fees for undergraduates at Bucknell. 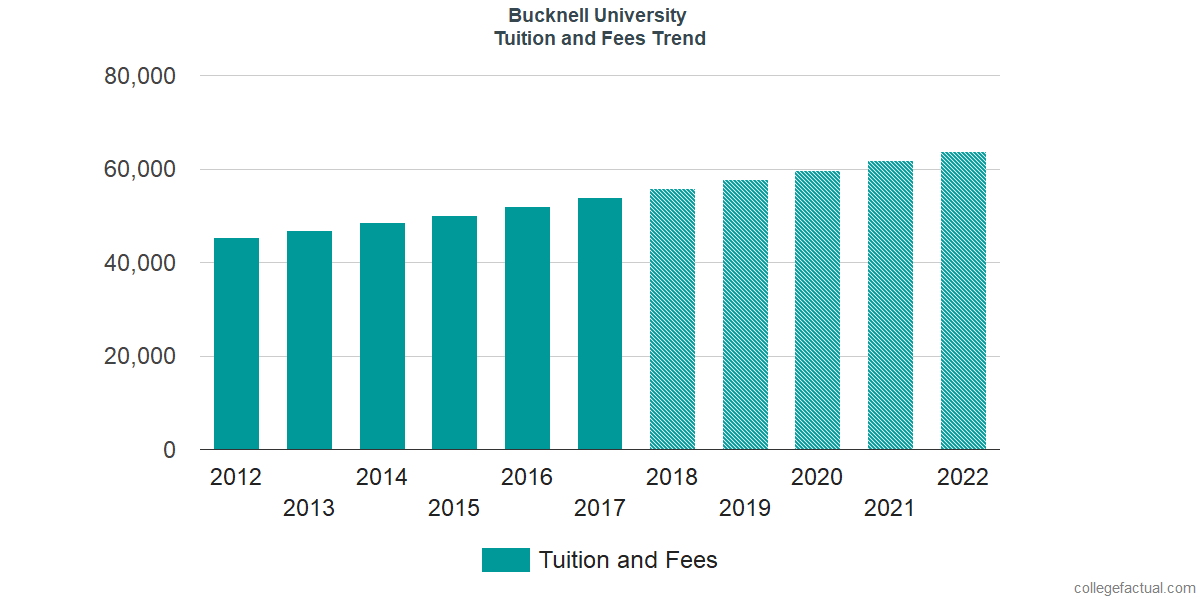 Be aware of how much college fees and tuition is increasing annually. At a lot of schools undergrads will end up spending more on their final year of college than they did for their first.

Get our answers to common questions and additional information about college tuition and fees.

Continue Your Research on Bucknell