Start now by Learning About Diversity at Calvin Seminary, and how it is Similar to Other Schools in the U.S..

While we are able to calculate at least one measure of diversity for almost all colleges, Calvin Theological Seminary is an exception.

Racially-diverse colleges offer students the chance to study and learn with undergraduates from racial and ethnic groups that are unique from their own.

Unfortunately, Calvin Theological Seminary did not provide enough diversity data, so we weren't able to calculate a ranking.

Did you know that the average male to female ratio on college campuses is skewed towards women? There are currently about six females for every four males attending college. We've calculated this percentage for the majority of the colleges inside our database, but sadly, we don't have enough data on Calvin Theological Seminary's male to female diversity to supply you with this information.

Some young people prefer a school that mostly represents local students, while some may be searching for schools that recruit and attract students from all over the nation and the world. What are you looking for?

For most of the colleges within our database, we were able to determine the geographic diversity by looking at where matriculated students lived prior to enrolling in college.

Unfortunately, we were not able to get the data to determine Calvin Seminary's geographic diversity rank.

There is a relatively large community of about 119 international students at Calvin Theological Seminary representing at least -1 countries. For more complete information, see the Calvin Seminary International Student Page.

Would you prefer a school where the student body represents a mix of different ages and generations, or would you rather have a school where most students are the same age as you?

The typical student is between the ages of 18-21. However, this institution appears to attract a majority of older students. At Calvin Theological Seminary, 0.3% of students are in the age 18 to 21 bracket, compared to the national average of 60%. We rank Calvin Seminary #2,128 in the nation for student age diversity.

Analyze the age distribution of Calvin Seminary students with the following chart. 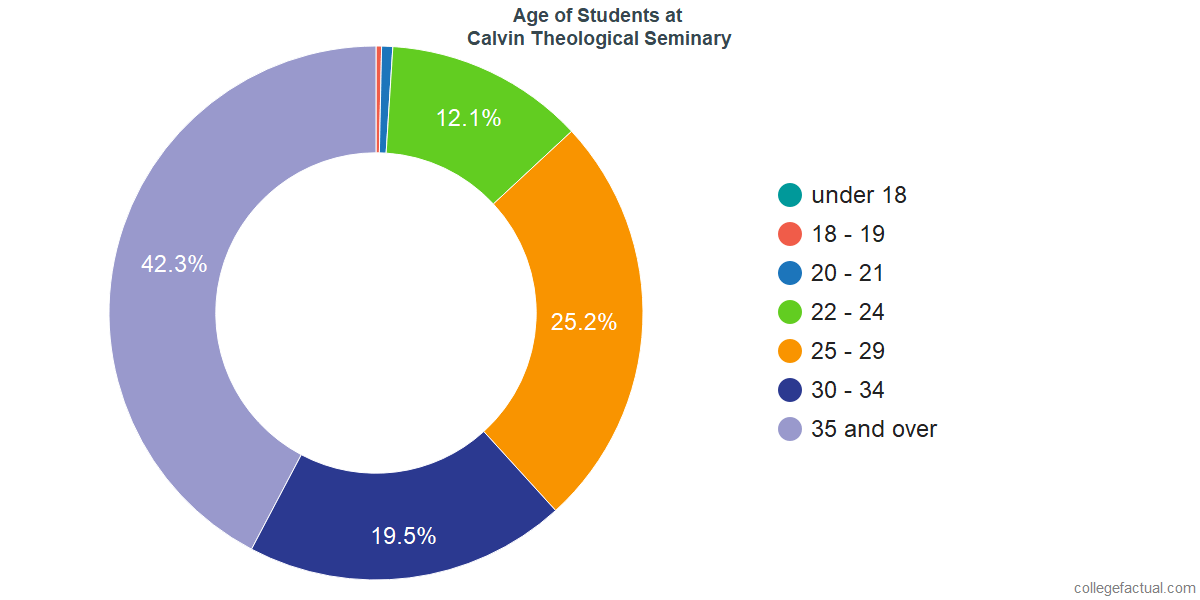 Continue Your Research on Calvin Seminary