Is Chippewa Valley Technical College safe? Below we'll take a look at crime statistics for the college campus and surrounding areas.

What you'll find in our crime and safety report on CVTC:

Understanding the Crime Stats for CVTC

9 Total Number of Incidents
1.14 Incidents per 1000 Students
In 2019, Chippewa Valley Technical College reported 9 incidents related to crime and safety that involved students at or near campus or on other properties associated with the school. Since the number of students at the school that year was 7,924, that's 1.14 incidents per 1,000 students.

The chart below shows what percentage of CVTC crime and safety incidents are in each category. 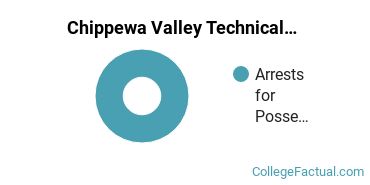 Around 100.0% of the crime and safety-related incidents at Chippewa Valley Technical College resulted in arrests for possession.

The charts below show how CVTC compares to other colleges and universities in the nation when it comes to each category of crime and safety-related incidents. Note that this does not take school size into account so larger schools are likely to have more incidents.

The percentage breakdown of CVTC crime and safety incidents by location is shown in the following chart. 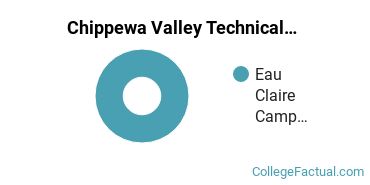 9 Total Number of Incidents
1.14 Incidents per 1000 Students
Chippewa Valley Technical College reported 9 incidents related to crime and safety in 2019. These student-involved incidents took place on Eau Claire public property in areas surrounding the campus. Since the number of students at the school that year was 7,924, that's 1.14 incidents per 1,000 students.

The chart below shows what percentage of CVTC student-related crime and safety incidents in the Eau Claire neighborhood surrounding the campus are in each category. 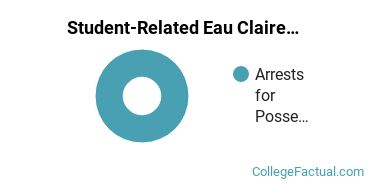