We've pulled together some essential information you should know about the program, including how many students graduate each year, the ethnic diversity of these students, average starting salaries, and more. In addition, we cover how Georgetown ranks in comparison to other schools with nursing programs.

Georgetown is in the top 10% of the country for nursing. More specifically it was ranked #42 out of 723 schools by College Factual. It is also ranked #2 in District of Columbia.

Popularity of Nursing at Georgetown

During the 2018-2019 academic year, Georgetown University handed out 22 bachelor's degrees in nursing. Due to this, the school was ranked #1734 out of all colleges and universities that offer this degree. This is a decrease of 8% over the previous year when 24 degrees were handed out.

In 2019, 300 students received their master’s degree in nursing from Georgetown. This makes it the #23 most popular school for nursing master’s degree candidates in the country.

In addition, 7 students received their doctoral degrees in nursing in 2019, making the school the #229 most popular school in the United States for this category of students.

How Much Do Nursing Graduates from Georgetown Make?

Nursing majors who earn their bachelor's degree from Georgetown go on to jobs where they make a median salary of $67,900 a year. This is great news for graduates of the program, since this figure is higher than the national average of $61,050 for all nursing bachelor's degree recipients. 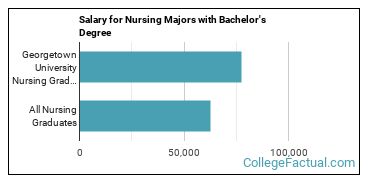 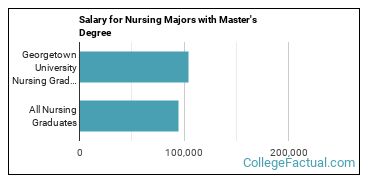 How Much Student Debt Do Nursing Graduates from Georgetown Have?

While getting their bachelor's degree at Georgetown, nursing students borrow a median amount of $17,500 in student loans. This is not too bad considering that the median debt load of all nursing bachelor's degree recipients across the country is $23,387. 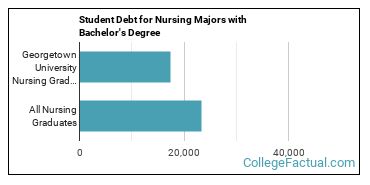 The typical student loan payment of a bachelor's degree student from the nursing program at Georgetown is $182 per month.

At Georgetown, a typical nursing student working on their master's degree borrrows about $107,503 in student loans. This is not favorable since the median amount of student debt for all nursing master's graduates is $41,000. 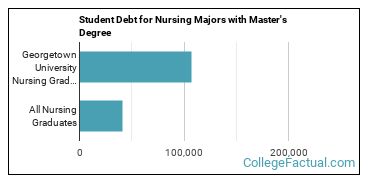 Those master's students from Georgetown on a 10-year student debt repayment plan end up paying a median amount of $1,253 per month.

Take a look at the following statistics related to the make-up of the nursing majors at Georgetown University.

In the 2018-2019 academic year, 22 students earned a bachelor's degree in nursing from Georgetown. About 95% of these graduates were women and the other 5% were men. 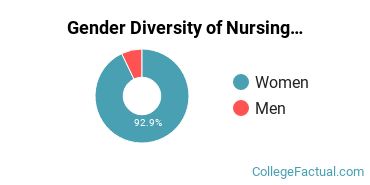 The majority of bachelor's degree recipients in this major at Georgetown are white. In the most recent graduating class for which data is available, 68% of students fell into this category.

The following table and chart show the ethnic background for students who recently graduated from Georgetown University with a bachelor's in nursing. 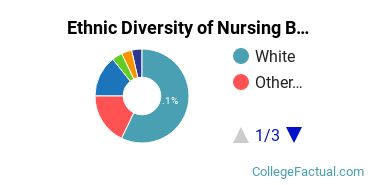 For the most recent academic year available, 8% of nursing master's degrees went to men and 92% went to women. 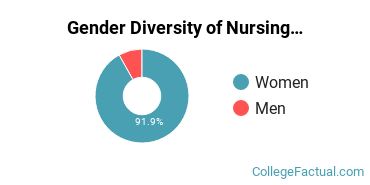 The majority of master's degree recipients in this major at Georgetown are white. In the most recent graduating class for which data is available, 72% of students fell into this category.

The following table and chart show the ethnic background for students who recently graduated from Georgetown University with a master's in nursing. 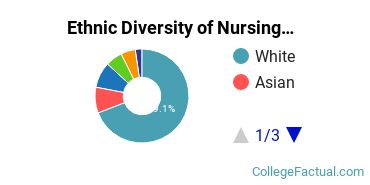