See current and forecasted tuition and fees for National University, and how these charges compare to regional and nationwide averages.

Plan economically for your college degree. Compare National University's tuition charges to other American colleges and universities. Check for tuition tendencies and increases to find out whether you have to allocate more funds for the next four years of tuition.

How do Fees & Tuition at National University Measure Up To Other Schools?

For nationwide, regional and statewide comparisons, look at the table below to see how National University measures up to other schools.

How Much Will Tuition & Fees Be for National University?

In contrast to public colleges, National University does not offer marked down fees and tuition to students who live in state.

National University tuition and fees is the number quoted to students for one academic year, not including room and board. Then again, most students end up spending less than full tuition after receiving financial aid and other reductions.

Visit the Cost Per Credit Hour page for more information.

There has been a growth of 2.1% in National University tuition and fees for out-of-state students in the past 5 years. Tuition increased by 2.1% and fees increased by 0.0%. This year, students should expect to pay $13,310 based on current estimates.

Due to price increases, the full cost of a four-year degree will be $54,964, and the full expense of a two-year degree would be $26,903, not including other costs for books, transportation, and room and board.

Look at the following chart to find out how National University tuition and fees might grow in the future. 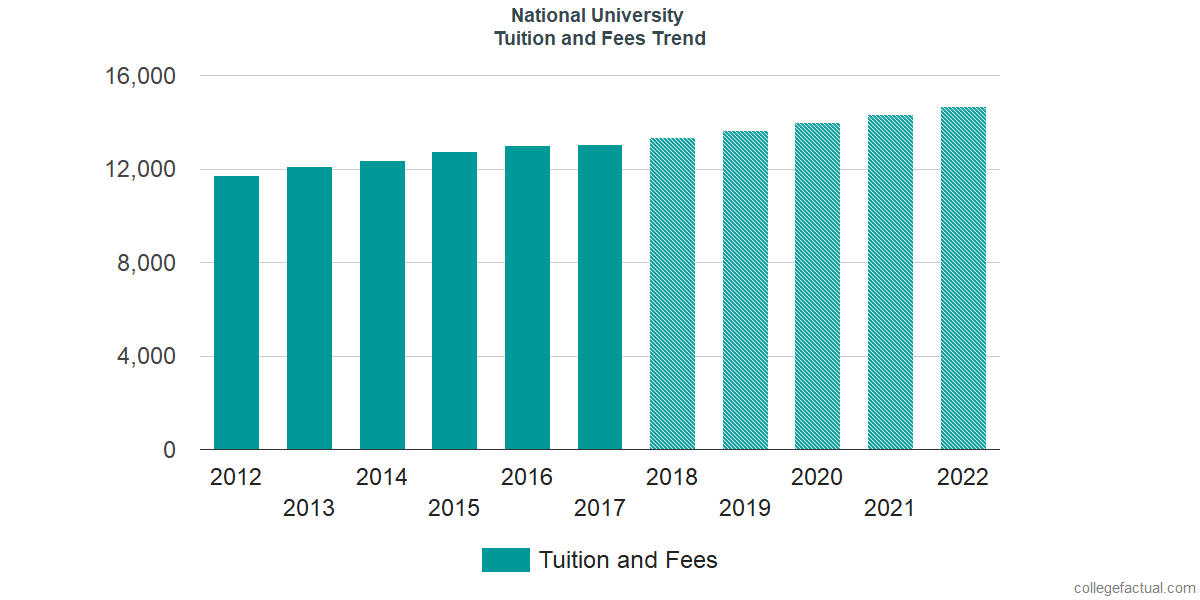 Take note of how much college fees and tuition is increasing every year. At a lot of schools students will end up spending more money on their final year of college compared to what they did for their first.

Find our answers to frequently asked questions and get more information about college tuition and fees.

Continue Your Research on National University