Computer Programmers are able to design and build their own computer programs. Majoring in this exciting field will allow you to learn how computer programs work, and how you can expand upon them or create one of your own. Students take classes in database design, Java programming, web programming, mathematics, and business communications among others to learn all about what's behind programs and operating systems.

Computer Programming was the 121st most popular major in the 2018-2019 school year. Colleges in the United States reported awarding 10,688 degrees in this year alone. This is a difference of 590 over the prior year, a growth of 5.5%.

There are 356 schools offering degrees in computer programming in the United States. Explore this or one of our many other custom programming rankings further below. What Are The Requirements For a Degree in Computer Programming

Those who are interested in Computer Programming often have a background in computers and mathematics. They also have strong analytical skills and pay close attention to detail. Since you will be creating programs and working to fix any bugs in computer systems, it is important that you have good concentration while working with long lines of code and troubleshooting to detect and fix any errors. Computer programs can take a long time to perfect. You will need the ability to work on the computer and deal with code for extended hours.

Many computer programmers work the typical workweek in an office or out of their home. While they may work as part of a team for large projects, most jobs are independent. Since code can be worked on and written anywhere, many computer programmers live in a different location than where they work. This opens up the possibility of working for any company in the world without having to move locations.

An internship and previous experience are not necessary in this field, but would be beneficial to students. This hands-on experience will teach students about working with code and developing software. Students will learn to work with programs and troubleshoot issues with the assistance of a professional.

computer programming degree applicants generally need have finished high school or their GED. Many schools may also have GPA and SAT/ACT score minimums that must be met. Once you obtain your degree, additional programming certifications required to pursue a career in this field.

79.9% of programming workers have at least a bachelor's. See the chart below for the most common degree level workers in computer programming have received. 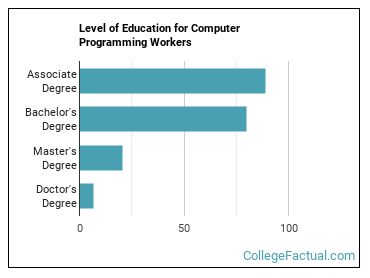 The education level required is different depending on the programming career you are seeking.

A large majority of Computer Programming graduates work for either software developers or as part of businesses or corporations. This degree equips graduates with the skills to work in any environment that relies on computers or programs.

Since computer programming can be done from any location, many corporations are hiring from other countries where they are able to pay lower wages.

Want a job when you graduate with your programming degree? Computer Programming careers are expected to grow 16.6% between 2016 and 2026.

The following options are some of the most in-demand careers related to computer programming.

How Much Money Do People With a Programming Degree Make?

Computer Programming graduates between 2015-2017 reported earning an average of $45,886 in the 2017-2018 timeframe. Earnings can range from as low as $13,900 to as high as $82,400. As you might expect, salaries for programming graduates vary depending on the level of education that was acquired. 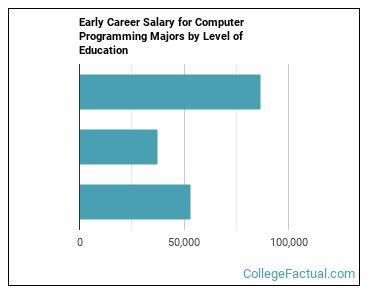 Salaries for computer programming graduates can vary widely by the occupation you choose as well. The following table shows the top 5 highest paying careers programming grads often go into.

Getting Your Computer Programming Degree

With over 1,122 different programming degree programs to choose from, finding the best fit for you can be a challenge. Fortunately you have come to the right place. We have analyzed all of these schools to come up with hundreds of unbiased programming school rankings to help you with this.