For the student who has a broad interest in many different areas, a major in Liberal Arts and General Studies may be for you.

This major will not put you on a specific career track; rather you will become skilled in many different areas such as reading, writing, research and critical thinking. You will build a broad education base and will learn skills that will become accessible in any career. Students may be able to choose a concentration where they can delve into a particular subject that interests them. Examples of this would include the humanities, natural sciences, or the social sciences.

Liberal Arts General Studies was the 1st most popular major in the 2018-2019 school year. Colleges in the United States reported awarding 547,539 degrees in this year alone. This is a difference of 30,785 over the prior year, a growth of 5.6%. Requirements for Getting a Degree in Liberal Arts General Studies

This is a very interdisciplinary subject. You will be asked to be self-disciplined and work hard to accomplish all of your assignments. Not only will you be engaging in various subjects at the same time, but you will also make connections between different subjects. Curiosity and an open mind are critical as you will regularly delve into new content. By experiencing an abundance of courses you will determine what you enjoy and shape your focus.

It is also important that you are able to work with people. You will be asked to participate in class discussions and work with your peers for group projects. This will let you to gain different perspectives and will also sharpen your oral communication skills. Reading and writing skills will also be improved. You should be ready to do a lot of reading and write a lot of research papers and response journals.

Getting Accepted Into a Liberal Arts General Studies Program

New students will need to have completed high school or a GED program and each school will have their own minimum GPA and SAT/ACT test requirements. In addition to these basic liberal arts general studies program qualifications, to serve in some liberal arts careers, special certification may be required outside of your degree.

Career Opportunities for A Degree In Liberal Arts Graduate

With a degree in Liberal Arts and General Studies your career opportunities will seem endless. You will learn many important skills while in school that can transfer to just about any career. One option is to go to graduate school to obtain a Master's in business, law or education. You can also go right into the work force and work in advertising, business, marketing, project management, journalism, or public relations.

The career opportunities are vast. Salary will depend greatly upon what career you choose and how much effort you are willing to put in as an undergrad developing your skills.

Want a job when you graduate with your liberal arts degree? Liberal Arts General Studies careers are expected to grow 9.4% between 2016 and 2026.

The following options are some of the most in-demand careers related to liberal arts general studies.

Liberal Arts General Studies graduates between 2015-2017 reported earning an average of $26,790 in the 2017-2018 timeframe. Earnings can range from as low as $10,600 to as high as $91,100. As you might expect, salaries for liberal arts graduates vary depending on the level of education that was acquired. 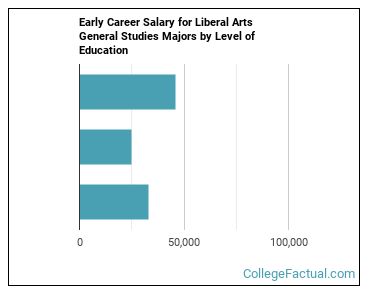 With over 4,744 different liberal arts degree programs to choose from, finding the best fit for you can be a challenge. Fortunately you have come to the right place. We have analyzed all of these schools to come up with hundreds of unbiased liberal arts school rankings to help you with this.

One of 0 majors within the Liberal Arts / Sciences & Humanities area of study, Liberal Arts General Studies has other similar majors worth exploring.