How Much Does Alvin Community College Cost?

Learn the base cost of Alvin Community College by getting details on in-state and out-of-state tuition and fees. Compare tuition and fees to nationwide and state averages to put those costs in context. In this Alvin cost report, you'll find:

How Much Does Alvin Charge for Tuition?

Alvin Community College tuition and fees is the number charged to students for one year of attendance, and does not include room and board.

Remeber that many students qualify for scholarships and financial aid that will lower the amount they have to pay.

How much does Alvin Community College cost for part-time students?

How Do Alvin Tuition & Fees Compare to Other Schools?

Undergraduates who attend school in the same state they live in pay around $16,784 in yearly tuition and fees. In-state undergraduates at Alvin pay about $2,834 a year, which is significantly less than the countrywide average.

The chart below shows how Alvin compares to other schools nationwide, in the region, and in the state.

Remember to also consider financial aid when trying to decide if you can afford to go to a particular school. For more details on that, see: Alvin Community College Financial Aid.

In-state Alvin tuition and fees grew with an average annual rate of 0.60% over the past five years. Texas residents may pay an estimated $2,868 this school year.

If in-state tuition and fees keeps growing at the same pace, the estimated cost for two years at Alvin would be $5,753, and $11,575 for four years.

The following chart shows projected upcoming tuition and fees for undergraduates at Alvin. 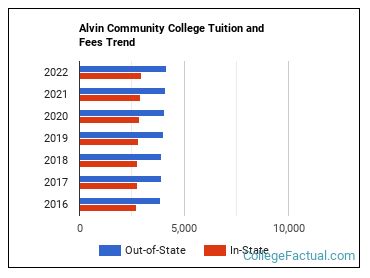 Take note of just how much the tuition and fees are increasing yearlyl. At a log of colleges students will end up paying more for their final year of school than they did for their first.

Discover answers to your finance concerns in the tuition & fees FAQ.

Options to Finance Your Alvin Education?