How Much Does ASA College Cost?

See current and projected tuition and fees for ASA College, and how those expenses constrast to nationwide and regional averages. In this ASA Institute cost report, you'll find:

How Much Does ASA Institute Charge for Tuition?

In 2020-2021, the average tuition and fees at ASA College ran about $12,728 per year for students working on an undergraduate degree. Students from New York did not receive a discount.

These tuition and fees costs include one year of academic instruction, but do not cover room and board.

The numbers quoted on this page are all sticker price and don't include any financial aid or scholarships students may qualify for.

How much does ASA College cost for part-time students?

How Do ASA Institute Tuition & Fees Compare to Other Schools?

The national out-of-state average for tuition and fees is $19,933 a year. With an average cost of $12,728 in tuition and fees for undergraduate students, ASA College is inexpensive when compared to the national average. Students do not receive any discounts for living in New York.

The chart below shows how ASA Institute compares to other schools nationwide, in the region, and in the state.

Note that a school may appear to be more expensive than another school when you look at tuition and fees alone, but it may actually be a better deal when you factor in financial aid packages. For more details on that, see: ASA College Financial Aid.

ASA Institute tuition and fees have grown about -0.49% annually for the past five years. The tuition increased by -0.50%, and fees by 1.93%. The estimated cost for this year's tuition and fees is $12,604 if the growth rate continues.

Remeber to factor in additional costs such as room and board, transportation or books. 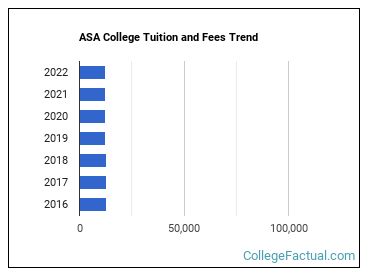 Unless your school has advertised price freezes, it is likely the cost of tuition and fees will go up every year. Make sure you factor this into your budget.

Get some answers to the most frequently asked college finance questions.