41 awards Ranking Badges
1% Student Loan Default Rate
Find out more about how Bastyr University ranks, how diverse it is, what majors it offers, and other essential facts below. Want to know more about a specific stat? Just click on its tile, and you’ll go to a page that goes more in-depth on that subject. You can also use the links below to go directly to any section on this page.

How Well Is Bastyr University Ranked?

Bastyr University was awarded 41 badges in the 2022 rankings. The highest ranked major at the school is herbalism/herbalist.

Bastyr University was not ranked in College Factual's Best Overall Colleges report this year. This may be because not enough data was available.

Is It Hard to Get Into Bastyr University?

Is Bastyr University a Good Match for You?

The student to faculty ratio is often used to measure the number of teaching resources that a college or university offers its students. The national average for this metric is 15 to 1, but at Bastyr University it is much better at 11 to 1. That's good news for students who want to interact more on a personal level with their teachers.

The full-time faculty percentage at Bastyr University is 42%. This is lower than the national average of 47%.

Find out more about the retention and graduation rates at Bastyr University.

During the 2017-2018 academic year, there were 109 undergraduates at Bastyr University with 69 being full-time and 40 being part-time.

How Much Does Bastyr University Cost?

The student loan default rate at Bastyr University is 1.4%. This is significantly lower than the national default rate of 10.1%, which is a good sign that you'll be able to pay back your student loans.

Get more details about paying for Bastyr University.

How Much Money Do Bastyr University Graduates Make?

$40,700 Avg Salary of Grads
Average Earnings Boost
The pay for some majors is higher than others, but on average, students who graduate with a bachelor's degree from Bastyr University make about $40,700 a year during their first few years of employment after graduation. This is in the same neighborhood of the average college graduate's salary of $39,802 per year. However, certain majors may produce higher-paying graduates. 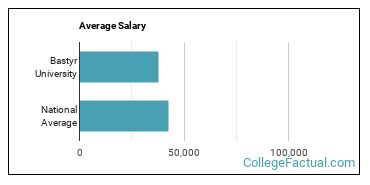 See which majors at Bastyr University make the most money.

Washington State
69 Full-Time Undergraduates
Suburb Campus Setting
Located in Kenmore, Washington, Bastyr University is a private not-for-profit institution. The suburban atmosphere of Kenmore makes it a great place for students who want the amenities of city life without actually living in the middle of a constant hustle and bustle.

Get more details about the location of Bastyr University. 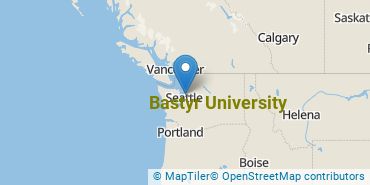 11 Majors With Completions
50 Undergraduate Degrees
246 Graduate Degrees
During the most recent year for which we have data, students from 11 majors graduated from Bastyr University. Of these students, 50 received undergraduate degrees and 246 graduated with a master's or doctor's degree. The following table lists the most popular undergraduate majors along with the average salary graduates from those majors make.

Learn more about the majors offered at Bastyr University along with which ones have the highest average starting salaries.

7% Take At Least One Class Online

In 2019-2020, 65 students took at least one online class at Bastyr University. This is an increase from the 0 students who took online classes the previous year.

Find Out More About Bastyr University