Just how much does Chowan University ask for tuition now, and how much is tuition forecasted to change? How does this compare to other schools? Keep reading to find out.

Prepare yourself money wise for your degree. Compare Chowan University's fees and tuition to other typical colleges and universities. Check for tuition developments and increases to find out if you have to allocate more resources for the next four years of paying for college.

The subsequent table outlines how Chowan University measures up to other schools nationally, regionally and by state.

How Much Will Tuition & Fees Be for Chowan University?

Full-time students at Chowan University were charged $25,480 in fees and tuition for the 2019 - 2020 academic year, before corrections for financial aid. From this total, the expense of tuition was $25,480.

As opposed to public colleges, Chowan University does not offer a tuition discount to in-state students.

Chowan University fees and tuition is the amount billed to undergrads for one academic year, and does not include room and board. However, most students end up paying below full tuition after getting financial aid along with other reductions.

The subsequent table outlines the costs described above for the 2019 - 2020 school year.

There has been an increase of 2.3% in Chowan University fees and tuition for out-of-state students in the past 5 years. Tuition increased by 2.3% and fees increased by 0.0%. This year, undergraduates should anticipate paying $26,056 if the growth keeps up.

Because of price increases, the full cost of a four-year degree will be $107,810, and the full price of a two-year degree would be $52,701, which doesn't include other expenses for books, transportation, and room and board.

View what upcoming tuition and fees will be for Chowan University students in the next chart. 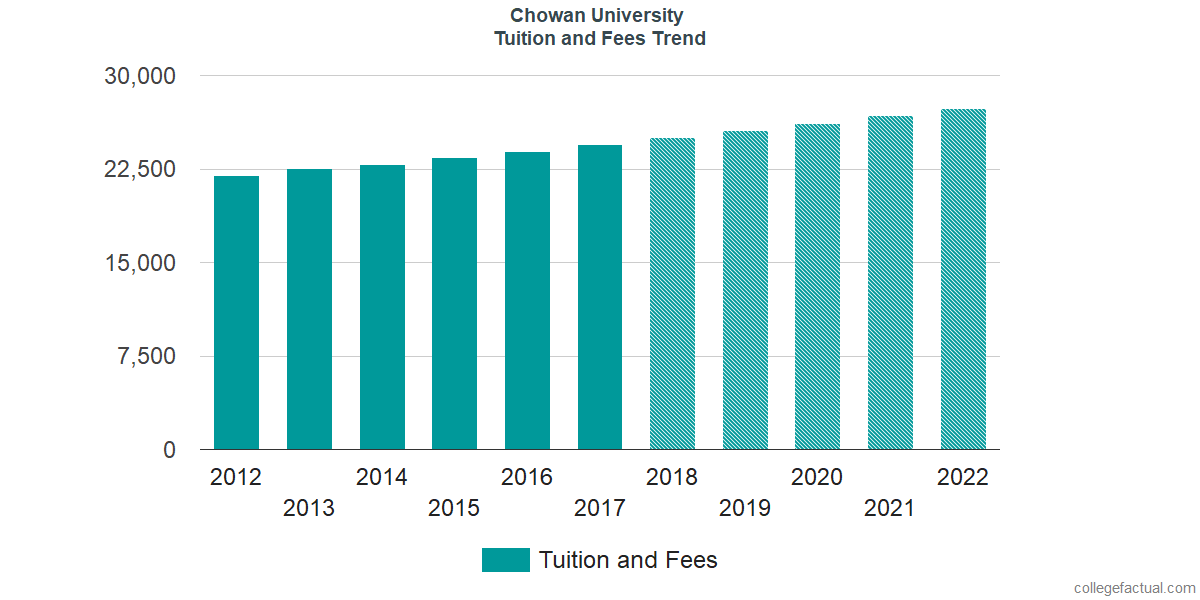 At most schools you will end up paying more for your last year of college than you will in your first. This is because of yearly price increases. It's good to be aware!

Continue Your Research on Chowan University