Just how much does Medaille cost for tuition now, and how much can they charge down the road? How do these charges compare to the average? Keep reading to find out.

Plan financially for your degree. Compare Medaille College's fees and tuition to other American colleges and universities. Check for tuition developments and increases to find out whether you should budget for more funds for the next four years of paying for college.

How do Fees & Tuition at Medaille Compare to Other Schools?

The subsequent table outlines how Medaille measures up to other schools nationally, regionally and by state.

How Much Will Tuition & Fees Be for Medaille?

Full-time students at Medaille College were charged $28,360 in fees and tuition for the 2018 - 2019 academic year, before corrections for financial aid. From this total, the expense of tuition was $28,360.

Unlike public colleges, Medaille does not offer a tuition discount to in-state students.

Tuition and fees cover the expense of attendance for one academic year, but don't include room and board, which will be an additional cost you will get if you decide to stay on campus. Bear in mind a lot of students have financial aid and scholarships which reduce the cost of college

The subsequent table outlines the costs described above for the 2018 - 2019 school year.

There has been an increase of 4.0% in Medaille College fees and tuition for out-of-state students in the past 5 years. Tuition expanded by 4.0% and fees expanded by 0.0%. This year, undergraduates should expect to pay $29,486 based on current estimates.

Because of price increases, the full cost of a four-year degree will be $125,155, and the full price of a two-year degree would be $60,142, not including other expenses for books, transportation, and room and board.

View the following chart to see how Medaille fees and tuition might grow in the future. 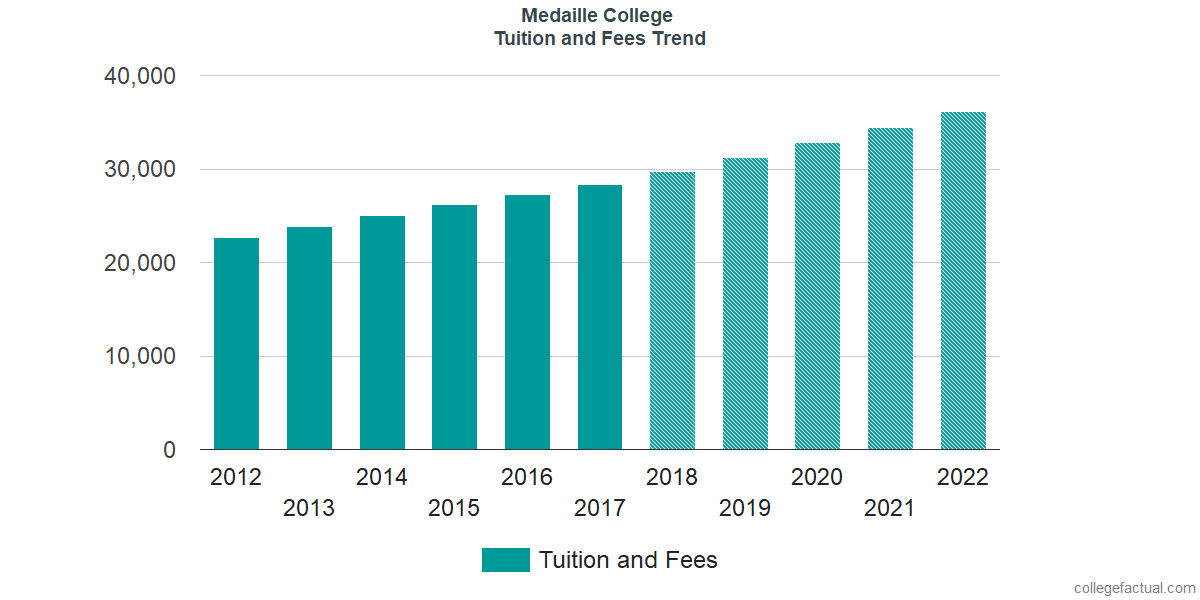 Take note of how much college fees and tuition is growing annually. At most schools undergrads will end up spending more on their final year of college compared to what they did for their first.

Continue Your Research on Medaille