Find out what the standard tuition charge is for U.S. undergrads around the country, and how Meredith stacks up.

Be prepared financially for your education. Compare Meredith's tuition and fees to American colleges. Check for price tendencies and potential increases to see if you should budget for more funds for the next 4-6 years of college bills.

How Does Meredith College Compare to Other Schools?

The next table outlines how Meredith measures up to other schools nationally, regionally and by state.

How Much Will Tuition & Fees Be for Meredith?

Full-time undergraduate students at Meredith College were charged $35,916 in tuition and fees for the 2018 - 2019 academic year, before modifications for financial aid. $35,816 was the cost of tuition. $100 was fees. Find out more about the net price.

Unlike public colleges, Meredith does not provide a tuition discount to residents of the state.

Fees and tuition charges quoted here do not include room and board, which will drive up your costs. Then again, a lot of students end up having to pay less than full tuition because they get financial aid as well as other rate reductions.

How much does Meredith cost part time?

There has been a growth of 3.5% in Meredith College tuition and fees for out-of-state students in the past 5 years. Tuition increased by 3.5% and fees increased by 0.0%. This year, undergrads should anticipate paying $37,169 based on current projections.

Because of price increases, the full cost of a four-year degree from Meredith will be $156,644, and the full price of a two-year degree would be $75,636, which doesn't include other charges such as books, transportation, and room and board.

See what upcoming tuition and fees will be for Meredith students in the following chart. 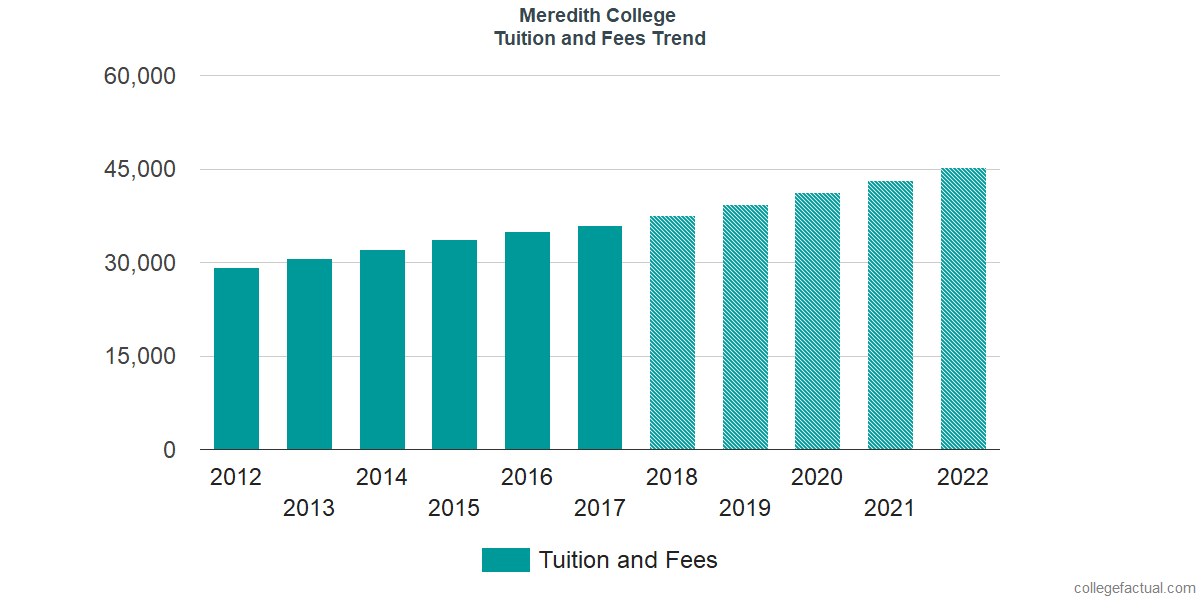 Mainly due to inflation as well as other factors, the price of college has a tendency to grow every year. For this reason your final year of college might be much more expensive than your initial year.

Learn some answers to the most frequently asked finance questions on college.

Continue Your Research on Meredith