26 awards Ranking Badges
Fair Price Value for Your Money
Very High Overall Diversity
Find out more about how Seattle University ranks, how diverse it is, what majors it offers, and other essential facts below. If you're interested in learning more about a particular stat, just click on its tile to go to a new page that covers the topic more in-depth. Also, you can jump to any section of this page by clicking one of the links below.

How Well Is Seattle University Ranked?

Seattle University was awarded 26 badges in the 2021 rankings. The highest ranked major at the school is criminal justice and corrections.

Seattle U landed the #201 spot in College Factual's 2021 ranking of best overall colleges in the United States. The higher ed experts analyzed 1,715 colleges and universities across the nation to determine this ranking. This puts it in the top 15% of all schools in the nation.

Seattle U also holds the #4 spot on the Best Colleges in Washington ranking.

See all of the rankings for Seattle University.

Is It Hard to Get Into Seattle U?

Seattle University has an acceptance rate of 74%, which makes it somewhat selective. Make sure it's not the only school you apply to, even if it's your school of choice. Whether you get in or not will largely depend on how you compare to other applicants.

About 50% of students accepted to Seattle U submitted their SAT scores. When looking at the 25th through the 75th percentile, SAT Evidence-Based Reading and Writing scores ranged between 570 and 670. Math scores were between 560 and 660.

Is Seattle U a Good Match for You?

At Seattle U, the student to faculty ratio is an excellent 11 to 1. That's much better than the national average of 15 to 1. This indicates that many classes will probably be small, and students will have ample opportunites to work closely with their professors and classmates.

The full-time faculty percentage at Seattle University is 70%. This is higher than the national average of 47%.

The freshmen retention rate of 84% tells us that most first-year, full-time students like Seattle University enough to come back for another year. This is a fair bit higher than the national average of 68%. That's certainly something to check off in the good column about the school.

The on-time graduation rate for someone pursuing a bachelor's degree is typically four years. This rate at Seattle U for first-time, full-time students is 64%, which is better than the national average of 33.3%.

Find out more about the retention and graduation rates at Seattle University.

Excellent Overall Diversity at Seattle U

With an overall score of 97.15 out of 100, Seattle U is one of the most diverse schools in the nation.

Get more detailed information on diversity and student demographics at Seattle University.

How Much Does Seattle University Cost?

$34,947 Net Price
64% Take Out Loans
$30,084 Total Student Loans
The overall average net price of Seattle U is $34,947. The affordability of the school largely depends on your financial need since net price varies by income group. See the table below for the net price for different income groups.

Net Price by Income Group for Seattle U

The net price is calculated by adding tuition, room, board and other costs and subtracting financial aid.Note that the net price is typically less than the published for a school. For more information on the sticker price of Seattle U, see our tuition and fees and room and board pages.

While almost two-thirds of students nationwide take out loans to pay for college, the percentage may be quite different for the school you plan on attending. At Seattle U, approximately 64% of students took out student loans averaging $7,521 a year. That adds up to $30,084 over four years for those students.

The student loan default rate at Seattle U is 1.9%. This is significantly lower than the national default rate of 10.1%, which is a good sign that you'll be able to pay back your student loans.

Get more details about paying for Seattle University.

How Much Money Do Seattle U Graduates Make?

$56,500 Avg Salary of Grads
High Earnings Boost
Yearly salaries vary depending on what you major in, but on average, bachelor's degree recipients from Seattle U make around $56,500 per year during the early years of their employment. This is good news for future Seattle U graduates since it is 42% more than the average college graduate's salary of $39,802 per year. 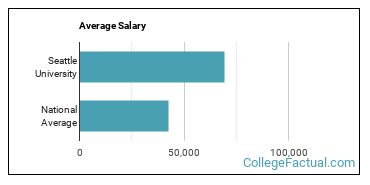 See which majors at Seattle University make the most money.

Washington State
4,469 Full-Time Undergraduates
Large City Campus Setting
Seattle University is a private not-for-profit institution located in Seattle, Washington. The city atmosphere of Seattle makes it a great place for students who enjoy having lots of educational and entertainment options.

Get more details about the location of Seattle University. 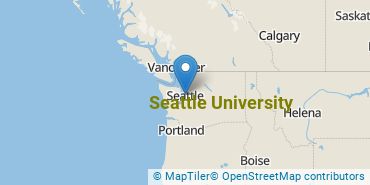 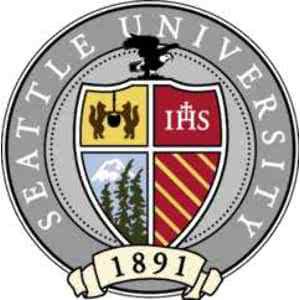 70 Majors With Completions
1,341 Undergraduate Degrees
1,054 Graduate Degrees
During the most recent year for which we have data, students from 70 majors graduated from Seattle University. Of these students, 1,341 received undergraduate degrees and 1,054 graduated with a master's or doctor's degree. The following table lists the most popular undergraduate majors along with the average salary graduates from those majors make.

Learn more about the majors offered at Seattle University along with which ones have the highest average starting salaries.

Online Learning at Seattle U

In 2017-2018, 224 students took at least one online class at Seattle University. This is an increase from the 174 students who took online classes the previous year.

Find Out More About Seattle University

If you’re considering Seattle University, here are some more schools you may be interested in knowing more about.

Curious on how these schools stack up against Seattle U? Pit them head to head with College Combat, our free interactive tool that lets you compare college on the features that matter most to you!