If you see yourself breeding, training, or raising animals, then a degree in animal science is for you.

Animal Science majors working with animals and envision a program to learn more about the creatures and how to properly work with them. Classes in Animal Science include animal biology and physiology, biochemistry, biology, and life sciences to learn the principles surrounding animal husbandry, livestock operations, and the business of agriculture.

Although schools offer the option to major in general Animal Science, there is also the option to specialize in areas such as Agricultural Animal Breeding, Animal Health, Animal Nutrition, Dairy Science, Livestock Management and Poultry Science.

A Spike in Animal Science Degrees

There are 127 schools offering degrees in animal science in the United States. This year's Best Animal Science Schools ranking compares 89 of them to identify the best overall programs in the country. Explore this or one of our many other custom animal science rankings further below. 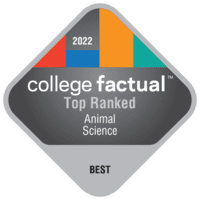 Working with animals takes patience, compassion, and an interest in their well-being. The job requires strong problem solving skills and close attention to detail to assess any issues that come up during animal training, and to ensure animals are maintaining a proper diet and show no abnormal changes in behavior. Animal Scientists work closely with farmers and animal owners, so it is necessary to possess strong interpersonal and communication skills to ensure information about animals is properly and clearly shared with all necessary individuals.

Depending on the type of job pursued, the typical workweek of an Animal Science major varies. Animals require care around the clock, so hours may be irregular and require work at nights and on the weekends. Depending on where you work however, you may have a more typical office job that sticks to a 40-hour a week schedule.

A high school diploma or equivalent is typically required for most animal science degree programs and many students will need a minimum GPA and SAT/ACT score depending on the school. In addition to these basic animal science program qualifications, to serve in some animal science careers, special certification may be required outside of your degree.

Animal Science degree levels vary. You can spend many years getting as high as a in animal science to something that takes less time like a . Depending on the animal science degree you choose, obtaining your diploma can take anwhere from 1 to 4+ years. 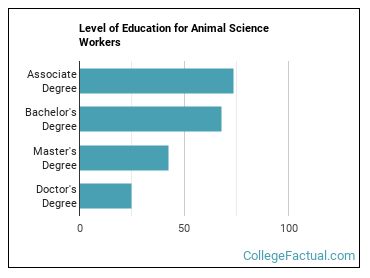 This of course varies depending on which animal science career you choose.

There are many career options available to Animal Science majors. Many people immediately think of a career on a ranch or farm, but a degree in this field opens up opportunities in scientific research, management, or even sales. Animal Science majors also hold jobs as breeders, trainers, and animal nutritionists.

A degree in Animal Science makes you very appealing to employers.

Want a job when you graduate with your animal science degree?

The following options are some of the most in-demand careers related to animal science.

How Much Money Do Animal Science Grads Make? 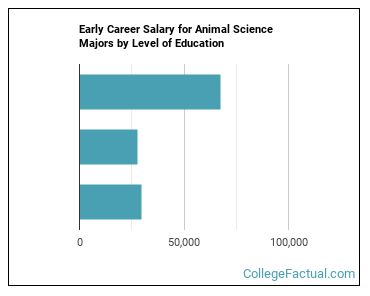 Getting Your Animal Science Degree

With over 360 different animal science degree programs to choose from, finding the best fit for you can be a challenge. Fortunately you have come to the right place. We have analyzed all of these schools to come up with hundreds of unbiased animal science school rankings to help you with this.

Animal Science is one of 16 different types of Agriculture & Agriculture Operations programs to choose from.