A major in Metallurgical Engineering will allow you become intimate with the three branches of metallurgy: physical metallurgy, extractive metallurgy, and mineral processing. This is a specific type of materials engineering that will teach you the different properties of metals and how they are involved in manufacturing. You will also learn how to test different metals through hands-on experiments to discover how they stand up to stress and other conditions. This is a great field for a curious learner who loves to spend time exploring and experimenting. Metallurgical Engineering majors spend a lot of time experimenting, research and writing reports on their findings. You will need to use critical thinking to identify the strengths and weaknesses of your conclusions.

Students should enjoy using math and science to help solve puzzles and complex problems. Most engineers will continue to actively learn after they graduate while on the job in order to understand new information and figure out different problem sets. Hone your communication skills while still in college in order to clearly articulate concepts both in speaking and writing.

Many schools will require at the minimum of summer internship, but most will ask you to work a co-op in order for you to get real world experience in the workforce. This experience makes you more valuable than a person without working a co-op job.

Prior Education for a Metallurgical Engineering Program

New students will need to have completed high school or a GED program and each school will have their own minimum GPA and SAT/ACT test requirements. Once you obtain your degree, additional metallurgical engineering certifications required to pursue a career in this field. 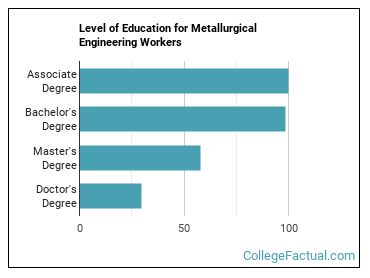 This of course varies depending on which metallurgical engineering career you choose.

Career Opportunities for A Degree In Metallurgical Engineering Graduate

Graduates have found jobs in all types of companies that work with metals. This could include cars, bikes, buildings, but even something like a toothpaste tube. As a metallurgic engineer you could work in research and development, production, design, or manufacturing.

The job prospect looks good for metallurgic engineers because many people in this field are starting to retire. That means new college graduates will be looked at to fill these positions.

Want a job when you graduate with your metallurgical engineering degree? Metallurgical Engineering careers are expected to grow 6.8% between 2016 and 2026.

The following options are some of the most in-demand careers related to metallurgical engineering.

How Much Money Do Metallurgical Engineering Grads Make? 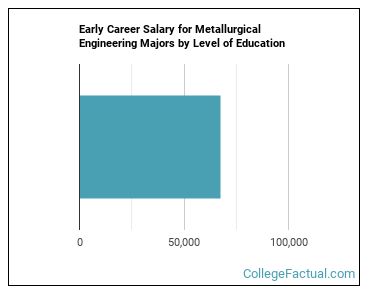 Getting Your Metallurgical Engineering Degree

One of 38 majors within the Engineering area of study, Metallurgical Engineering has other similar majors worth exploring.