4 Colleges in the Southwest Region
114 Forestry Degrees Awarded
$33,800 Avg Early-Career Salary
Forestry isn't the most popular major in the world, but it's not the least popular either. To be more precise it ranks #187 in popularity out of 368 majors in the country. As such, the degree program isn't offered at every college in the United States, but there are schools that do have a program in the field that are top-notch when it comes to quality.

In 2022, College Factual analyzed 4 schools in order to identify the top ones for its Best Forestry Schools in the Southwest Region ranking. When you put them all together, these colleges and universities awarded 114 degrees in forestry during the 2019-2020 academic year.

Jump to one of the following sections: 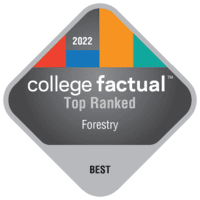 Your choice of forestry school matters, so we have put together these rankings to help you make your decision. For our Best Overall Forestry School rankings, we roll up the results of our degree-level rankings, weighted by the number of degrees awarded at that level.

You may want to choose one of the degree levels below to find the schools of most interest to you.

Since the program you select can have a significant impact on your future, we've developed a number of rankings, including this Best Forestry Schools in the Southwest Region list, to help you choose the best school for you. You can also filter this list by location to find schools closer to you.

More information on how we come up with our rankings can be found here: College Factual's Data Methodology.

Best Schools for Forestry in the Southwest Region

If you aren't interested in a particular degree level and want to know which schools are the overall best at delivering an education for the forestry degrees they offer, see the list below.

There were about 23 forestry students who graduated with this degree at Texas A&M College Station in the most recent year we have data available.

Any student pursuing a degree in forestry has to check out Stephen F Austin State University. SFASU is a fairly large public university located in the town of Nacogdoches. This university ranks 62nd out of 136 colleges for overall quality in the state of Texas.

There were roughly 31 forestry students who graduated with this degree at SFASU in the most recent year we have data available.

It is difficult to beat Northern Arizona University if you wish to pursue a degree in forestry. Located in the city of Flagstaff, NAU is a public university with a very large student population. A Best Schools rank of #1019 out of 2,576 colleges nationwide means NAU is a great university overall.

There were approximately 43 forestry students who graduated with this degree at NAU in the most recent data year. After graduating, forestry degree recipients usually earn an average of $33,800 in the first five years of their career.

More information about a degree in forestry from Northern Arizona University

There were about 9 forestry students who graduated with this degree at New Mexico Highlands University in the most recent data year.

Explore the best forestry colleges for a specific state in the Southwest Region .

Best for Non-Traditional Students
in Forestry

Most Popular Online
in Forestry

Best for Veterans
in Forestry

Most Popular
in Forestry

Most Focused
in Forestry