A major in Celtic Language & Literature focuses on the historical and modern languages of the Celtic people. These modern languages include Irish, Scots Gaelic, Breton, and Welsh and have been spoken throughout the British Isles, Asia Minor, and Continental Europe. Students majoring in this program will learn the dialects and pidgins, philology, linguistics, and literate of the Celtic Languages. While perusing this major, students will take courses in Beginning, Intermediate, and Advanced Languages, European History, Celtic Religion, and Celtic Art.

Celtic Language & Literature was the 358th most popular major in the 2019-2020 school year. Colleges in the United States reported awarding 5 degrees in this year alone. This 5 less than the prior year, a decrease of 100.0%.

The United States has 3 different schools where you can get a degree in Celtic language and literature. This year's Best Celtic Language & Literature Schools ranking compares 1 of them to identify the best overall programs in the country. Continue reading to check out one of our many unbiased rankings of Celtic programs later in this article. 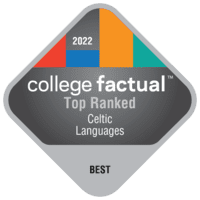 Requirements for Getting a Degree in Celtic Language & Literature

An open mind and love for storytelling are good traits to have in order to fully appreciate and grasp the many folktales and myths associated with Celtic culture. Much of the culture and history of ancient Celtic populations was passed down by word of mouth. An ear for languages, patience and determination are essential for students to master pronunciation.

Students can prepare for this major while still in high school by taking World History, Intro to Language courses, World Religion, and English. There are opportunities for study abroad programs at some institutions. This would allow student to practice their lingual skills and experience the culture first hand.

Prior Education for a Celtic Program

Celtic language and literature degree applicants generally need have finished high school or their GED. Many schools may also have GPA and SAT/ACT score minimums that must be met. Specific Celtic careers may require a certain level of degree attainment or additional certifications beyond that.

A doctor's degree is the most common level of education achieved by those in careers related to Celtic, with approximately 36.7% of workers getting one. Find out other typical degree levels for Celtic workers below.

62.8% of Celtic workers have at least a master's. The chart below shows what degree level those who work in Celtic language and literature have obtained. 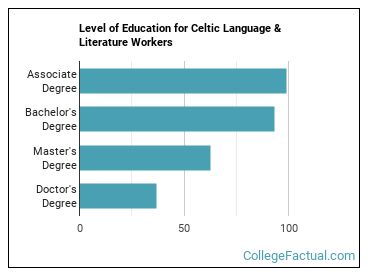 The education level required is different depending on the Celtic career you are seeking.

There are a few different career paths you can peruse with a degree in Celtic Language and Literature. One option is to become a Translator or Interpreter. These individuals are the bridge of communication between two cultures. With the growing demand for worldwide business and travel, these individuals are in higher demand. You may also find opportunities to teach literature, history, or language. Careers involving writing are another popular option for graduates.

Want a job when you graduate with your Celtic degree? Celtic Language & Literature careers are expected to grow 15.7% between 2016 and 2026.

The following options are some of the most in-demand careers related to Celtic language and literature.

How Much Money Do Celtic Grads Make?

As you might expect, salaries for Celtic graduates vary depending on the level of education that was acquired.

Salaries for Celtic language and literature graduates can vary widely by the occupation you choose as well. The following table shows the top highest paying careers Celtic grads often go into.

Getting Your Celtic Language & Literature Degree

With over 6 different Celtic degree programs to choose from, finding the best fit for you can be a challenge. Fortunately you have come to the right place. We have analyzed all of these schools to come up with hundreds of unbiased Celtic school rankings to help you with this.

Celtic Language & Literature is one of 17 different types of Foreign Languages & Linguistics programs to choose from.