Western and Southern European countries are full of fruitful culture and passionate languages. These regions are well known for their beautiful languages that roll off the tongue, producing wonderful poetry, songs and literature. A major in Romantic Languages allows you to focus on the various dialects of the Southern and Western countries of Europe, and other regions. In addition to learning about the languages, you will be instructed in the philology, art, applications in business, and science/ technology.

There are many concentrations within this major; they include French, Italian, Portuguese, Spanish, Romanian, Catalan, and Hispanic and Latin American Languages. While majoring in this field, you will be taking classes in Beginner, Intermediate, and advanced language course, Introduction to the Renaissance, Language History Culture, Caribbean Poetry and Cinema, and History of Literary Theory.

Romance Languages was the 63rd most popular major in the 2019-2020 school year. Colleges in the United States reported awarding 15,122 degrees in this year alone. This represents a small change of only 0.4% from the prior year's total of 15,062 romance languages degrees awarded.

The United States has 994 different schools where you can get a degree in romance languages. Our 2022 Best Romance Languages Schools ranking analyzes 342 of these schools to determine the best overall colleges for romance languages students. Continue reading to check out one of our many unbiased rankings of romance languages programs later in this article. 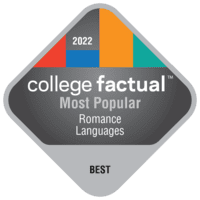 What Are The Requirements For a Degree in Romance Languages

An ear for languages and attention to detail will be helpful to learn these languages. Students must have patience and persistence to master the correct enunciation and pronunciation of a foreign language. This major focuses heavily in arts and history, so students should have a passion for those subjects.

In order to prepare for this major, it is advised to take prior language classes while still in High School. Students can also prepare themselves by taking European History, European Art, and English. It is recommended to take advantage of any study abroad programs available at your University.

Prior Education for a Romance Languages Program

romance languages degree applicants generally need have finished high school or their GED. Many schools may also have GPA and SAT/ACT score minimums that must be met. In addition to these basic romance languages program qualifications, to serve in some romance languages careers, special certification may be required outside of your degree. 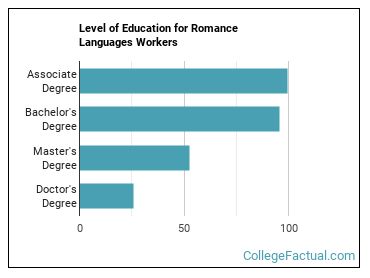 This of course varies depending on which romance languages career you choose.

Career Opportunities for A Degree In Romance Languages Graduate

Graduates who major in the Romance Languages receive a broad education preparing them for a variety of careers. Many students become foreign language teachers in grades from Kindergarten to High School or adult Education. You are also well prepared to teach literature or art. You may have to obtain a Master's Degree for some teaching positions.

This could be a great major for anyone who wants to travel in their job. You may find a job working abroad, or work for the U.S. government as a Foreign Service Officer. Other jobs include working as an interpreter or translator.

Want a job when you graduate with your romance languages degree? Romance Languages careers are expected to grow 8.3% between 2016 and 2026.

The following options are some of the most in-demand careers related to romance languages.

Recently graduated romance languages students earned an average of $30,408 in 2017-2018. Earnings can range from as low as $15,700 to as high as $58,200. As you might expect, salaries for romance languages graduates vary depending on the level of education that was acquired. 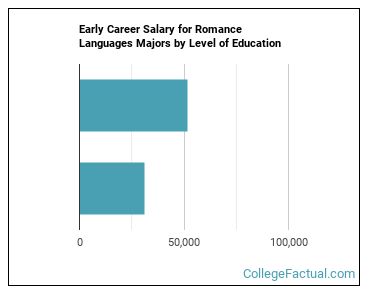 Getting Your Romance Languages Degree

With over 3,108 different romance languages degree programs to choose from, finding the best fit for you can be a challenge. Fortunately you have come to the right place. We have analyzed all of these schools to come up with hundreds of unbiased romance languages school rankings to help you with this.

Romance Languages is one of 17 different types of Foreign Languages & Linguistics programs to choose from.