Greek and Latin language and literature has been influential for centuries. Greek Mythology has lived on and still is a part of our culture today. The study of Classical Language and Literature educates students in the written and spoken traditions of ancient Rome and Greece. Students will be instructed in myths, stories, dialects and writings of the Greek and Latin language.

This program focuses on the development and origin of Greek and Latin Literature and Language. Students will not only be taught about the language itself, but also learn the culture and history of the Classical era. Some of the classes you will take include Beginning, Intermediate, and Advance Language Courses, Ancient Civilization and Cultural History, Mythology, Philosophy, Linguistics, and Folklore.

Classical Languages & Literature was the 204th most popular major in the 2019-2020 school year. Colleges in the United States reported awarding 1,426 degrees in this year alone. This 111 less than the prior year, a decrease of 7.8%. 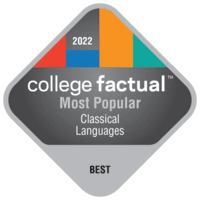 An open mind and a love for storytelling is crucial as students delve into ancient myths and stories. There is a very rich library of classic literature available to students who master the language. Someone with an interest in culture, history and sociology would find this major very intriguing and exciting.

In order to prepare for this major before college, it is recommended that students take Latin or Greek in high school if it is offered. Other classes that would be beneficial are World Geography, Philosophy, Western Civilization, and Humanities. These classes will help students learn the fundamentals before for majoring in this field. Some universities offer study-abroad programs in this major.

Prior Education for a Classical Languages Program

A bachelor's degree is the most common level of education achieved by those in careers related to classical languages, with approximately 37.8% of workers getting one. Find out other typical degree levels for classical languages workers below. 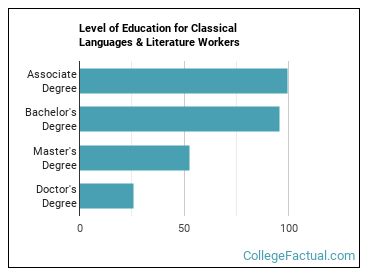 This of course varies depending on which classical languages career you choose.

Education is a popular career path for graduates who majored in Classical Languages and Literature. You would be well prepared to teach Latin, Greek, English or History in a high school setting. You may also continue your education in order to become a University Professor.

Graduates also find work as a curator, managing and organizing collections at museums. They can inform and educate visitors on the historic, artistic and cultural value of significant items in the museum. You may also find work as a Translator or Interpreter. These individuals are the bridge of communication between two cultures. With the growing demand for worldwide business and travel, opportunities in this career are promising. Your salary will differ depending on what career you pursue and whether or not you continue your education.

Want a job when you graduate with your classical languages degree? Classical Languages & Literature careers are expected to grow 8.3% between 2016 and 2026.

The following options are some of the most in-demand careers related to classical languages and literature.

How Much Money Do People With a Classical Languages Degree Make?

As you might expect, salaries for classical languages graduates vary depending on the level of education that was acquired.

Getting Your Classical Languages & Literature Degree

With over 696 different classical languages degree programs to choose from, finding the best fit for you can be a challenge. Fortunately you have come to the right place. We have analyzed all of these schools to come up with hundreds of unbiased classical languages school rankings to help you with this.