Germanic Language does not just represent the German dialectic, but actually encompasses a branch of Indo-European languages. They are broken up into three branches, the West Germanic, North Germanic, and East Germanic. A program in Germanic Languages will teach you one or more languages of Northern, Central or Western Europe. Students will additionally be instructed in philology, literature, dialects, and applications to business, science, and technology.

Concentrations within this major include German, Danish, Dutch/Flemish, Scandinavian, Norwegian, and Swedish. While majoring in one of these concentrations, you will be taking courses in Beginner, Intermediate, and Advanced language course, Northern Renaissance Art, Postwar literature, World Religion, and European History.

A Spike in Germanic Languages Degrees

Germanic Languages was the 216th most popular major in the 2019-2020 school year. Colleges in the United States reported awarding 1,415 degrees in this year alone. This is a difference of 43 over the prior year, a growth of 3.0%.

The United States has 368 different schools where you can get a degree in Germanic languages. Our 2022 Best Germanic Languages Schools ranking analyzes 171 of these schools to determine the best overall colleges for Germanic languages students. Continue reading to check out one of our many unbiased rankings of German programs later in this article. 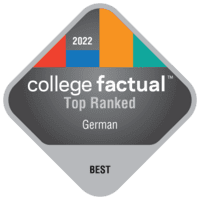 Requirements for Getting a Degree in Germanic Languages

Germanic speaking countries have a rich past, therefore a love for history and culture is helpful when majoring in this subject. Attention to detail is another important skill to possess, because of the complexity of these languages. Students who enjoy reading will love pursuing the classic works of fiction and non-fiction written in these languages.

To prepare for this major, students are advised to take Intro Language courses, Art History, European History, and Comparative Government & Politics. There are opportunities for study abroad programs at some institutions. This would allow student to practice their lingual skills and experience the culture of their chosen country first hand.

Prior Education for a German Program

New students will need to have completed high school or a GED program and each school will have their own minimum GPA and SAT/ACT test requirements. Once you obtain your degree, additional German certifications required to pursue a career in this field.

There are many different German degree levels. You can spend many years getting as high as a in Germanic languages to something that takes less time like a . The time it takes to complete a German degree varies depending on the program.

52.8% of German workers have at least a master's. View the chart below to get an idea of what degree level most of those in Germanic languages careers have. 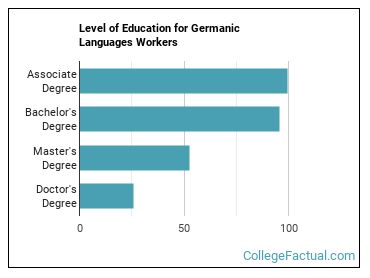 The education level required is different depending on the German career you are seeking.

A degree in Germanic Languages can lead to many different career opportunities. If you are interested in education, you can obtain a position as a Postsecondary or Adult Education teacher. You would have the opportunity to teach a Germanic dialect, along with Germanic culture and history. You may also be interested in becoming a translator. If you are interested in Foreign Service, you can become a Foreign Service Officer. These officers endorse American business and political interest and give information and aid about their countries to the U.S policymakers. They arrange cultural exchanges, and help Americans travel abroad.

Want a job when you graduate with your German degree? Germanic Languages careers are expected to grow 8.3% between 2016 and 2026.

The following options are some of the most in-demand careers related to Germanic languages.

How Much Money Do German Grads Make? 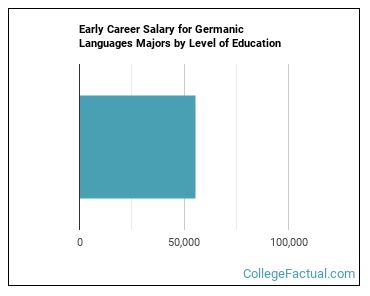 Salaries for Germanic languages graduates can vary widely by the occupation you choose as well. The following table shows the top highest paying careers German grads often go into.

Getting Your Germanic Languages Degree

With over 716 different German degree programs to choose from, finding the best fit for you can be a challenge. Fortunately you have come to the right place. We have analyzed all of these schools to come up with hundreds of unbiased German school rankings to help you with this.

One of 17 majors within the Foreign Languages & Linguistics area of study, Germanic Languages has other similar majors worth exploring.