Greek culture and history has been prevalent for over thousands of centuries and has greatly impacted other countries. Mythology, the Parthenon, Olympics, and Athens are all prominent representations of Greek culture. A major in Modern Greek Language & Literature will allow you to dive deep into an influential culture while learning the modern language. Students will study the growth of the Greek Language from the late 15th century to the present. Student will also be instructed in current Greek dialects, Modern Greek literature, Greek history, and applications to business and science.

While studying Greek Language & Literature you will be taking a variety of courses. These courses include Beginner, Intermediate, and Advanced Language Courses, Classical Art and Architecture, Modern Greek Literature in Translation, Culture of Contemporary Greece, and Conversation and Composition. These courses are not only in regard to Greek speech, but also Greek culture and history.

Greek Language & Literature was the 366th most popular major in the 2019-2020 school year. Colleges in the United States reported awarding 3 degrees in this year alone. This is a difference of 2 over the prior year, a growth of 66.7%.

The United States has 5 different schools where you can get a degree in Greek language and literature. This year's Best Greek Language & Literature Schools ranking compares 1 of them to identify the best overall programs in the country. Continue reading to check out one of our many unbiased rankings of Greek programs later in this article.

Requirements for Getting a Degree in Greek Language & Literature

Students who major in a foreign language should have an open mind in order to fully absorb the culture of another country. An individual with a love for culture will enjoy learning the history and art behind the Greek traditions. In order to comprehend and excel in learning the language, it is important to have an ear for languages and attention to detail. These skills would help you distinguish between complicated words and further understand grammar and syntax.

To prepare for this major, students are advised to take Intro Language courses, Mythology, Greek Art, Greek Society, and Greek History. Some Latin courses could be considered beneficial as well. There are opportunities for study abroad programs at some institutions which would allow a more thorough understanding of both the language and culture of Greece.

Prior Education for a Greek Program

New students will need to have completed high school or a GED program and each school will have their own minimum GPA and SAT/ACT test requirements. Once you obtain your degree, additional Greek certifications required to pursue a career in this field.

There are various different levels of Greek degrees. You can get anything from a in Greek language and literature to the highest Greek degree, a . How long it takes to complete some common Greek degree levels is shown below.

A doctor's degree is the most common level of education achieved by those in careers related to Greek, with approximately 36.7% of workers getting one. Find out other typical degree levels for Greek workers below.

Most workers in Greek have at least a master's degree. View the chart below to get an idea of what degree level most of those in Greek language and literature careers have. 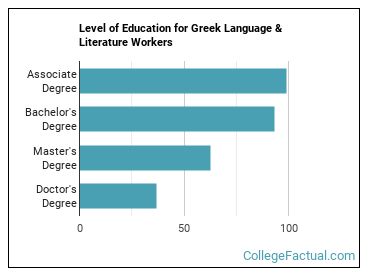 The education level required is different depending on the Greek career you are seeking.

A major in Modern Greek Language and Literature prepares students for a variety of careers. Graduates can become either foreign language teachers or literature teachers. Another fascinating career is to become an Interpreter and Translator. Graduates may also find work as a Foreign Service Officer. These officers endorse American business and political interest and give information and aid about their countries to the U.S policymakers.

Want a job when you graduate with your Greek degree? Greek Language & Literature careers are expected to grow 15.7% between 2016 and 2026.

The following options are some of the most in-demand careers related to Greek language and literature.

As you might expect, salaries for Greek graduates vary depending on the level of education that was acquired.

Salaries for Greek language and literature graduates can vary widely by the occupation you choose as well. The following table shows the top highest paying careers Greek grads often go into.

Getting Your Greek Language & Literature Degree

With over 7 different Greek degree programs to choose from, finding the best fit for you can be a challenge. Fortunately you have come to the right place. We have analyzed all of these schools to come up with hundreds of unbiased Greek school rankings to help you with this.

Greek Language & Literature is one of 17 different types of Foreign Languages & Linguistics programs to choose from.