Southeast Asia is home to over 2,500 of different languages and a rich, diverse culture. This region includes mainland Southeast Asia, Thailand, the Philippines, Indonesia, and other Southeast Asian countries. Majoring in Southeast Asian and Pacific Languages will provide an education in the various dialects of these countries, as well as geography, economics, politics, and cultural aspects that shape the region.

Students typically choose a concentration focusing on one area or language. Some of the concentrations you can choose include Australian, Indonesian or Malay, Burmese, Filipino, Cambodian, Lao, Thai, and Vietnamese Languages. Because all the concentrations are all different, most of the classes will not be the same; however some general classes include Art of Southeast Asia, Asian History, Asian literature, Asian Thought and Cultures, and Asian Traditions.

Southeast Asian & Pacific Languages was the 357th most popular major in the 2017-2018 school year. Colleges in the United States reported awarding 26 degrees in this year alone. This represents a 80.8% increase in Southeast Asian and Pacific degrees awarded over the prior year's total of 5.

Approximately 1 colleges in the U.S. offer a Celtic degree of some kind. Continue reading to check out one of our many unbiased rankings of Southeast Asian and Pacific programs later in this article. Students should have an interest in the Southeast Asian region, an ear for language and the patience to learn another language, master grammar, pronunciation and spelling. Much of your time will be spent studying the history, literature and culture of the region. This makes it an ideal major for students who loves art and storytelling.

You may be able to prepare for this major while still in high school by taking courses in Language, World History, World Religions, and English. There are opportunities for study abroad programs at some institutions. This would allow student to practice their lingual skills and experience the culture first hand.

Prior Education for a Southeast Asian & Pacific Program

Most workers in Southeast Asian and Pacific have at least a postbaccalaureate certificate. The chart below shows what degree level those who work in Celtic have obtained. 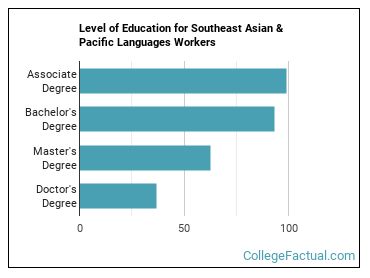 The education level required is different depending on the Southeast Asian and Pacific career you are seeking.

A degree in Southeast Asian & Pacific Languages can lead to many different career opportunities. If you are interested in teaching, there are for positions in Postsecondary and Adult Education. You would have the opportunity to teach Southeast Asian & Pacific dialect, along with culture and history. You also may be interested in becoming an ESL teacher.

Another option is to become a translator or interpreter. Translators and interpreters are in high demand because of growing business between nations. If you are interested in Foreign Service, you can become a Foreign Service Officer. These officers endorse American business and political interest and give information and aid about their countries to the U.S policymakers. They arrange cultural exchanges, and help Americans travel abroad.

The following options are some of the most in-demand careers related to Celtic.

How Much Money Do People With a Southeast Asian & Pacific Degree Make?

As you might expect, salaries for Southeast Asian and Pacific graduates vary depending on the level of education that was acquired.

Salaries for Celtic graduates can vary widely by the occupation you choose as well. The following table shows the top 5 highest paying careers Southeast Asian and Pacific grads often go into.

One of 16 majors within the Foreign Languages & Linguistics area of study, Southeast Asian & Pacific Languages has other similar majors worth exploring.