If you have a passion for the stage and revel in musicals, Shakespeare plays and live comedies, you may be interested in a degree in Drama and Theater Arts.

Students in the Drama and Theater Arts take classes in theater history, acting, costume design, stage movement, voice, directing, and scene design to learn about the necessary steps to produce a performance. You will participate in performances and learn about the behind the scenes and skill work necessary to ensure a successful production.

While some students enjoy taking classes in all aspects of Drama and Theatre Arts, others decide to specialize in areas such as Theater Design and Technology, Playwriting and Screenwriting, Theater Literature, Acting, Directing and Theatrical Production, Musical Theater, or Costume Design.

The United States has 968 different schools where you can get a degree in drama and theater arts. This year's Best Colleges for Drama & Theater Arts ranking compares 173 of them to identify the best overall programs in the country. Continue reading to check out one of our many unbiased rankings of theater programs later in this article. Requirements for Getting a Degree in Drama & Theater Arts

Depending on your area of specialization, your courses will require different skills. Acting requires memorization, public speaking and stage presence, while playwriting requires creativity and strong writing skills. Students interested in directing tend to be leaders, while costume designers are creative and skilled in fashion design. Those interested in theater tech may work behind the scenes with lighting and sound. However, all Drama and Theater Arts students have a passion for theater and tend to be good communicators.

A career in Drama and Theater Arts is usually fulltime, but work hours vary depending on the area of specialization. Critics attend productions, but spend most of their time in the office writing reviews. Directors and actors work long hours practicing and performing, while screenwriters and costume and set designers may work more typical hours with overtime when approaching a deadline. An internship or summer job in theater will allow you to work closely with a professional in your desired area of specialization and learn more about the profession.

Those interested in this field usually practice their skills with theater productions in high school and college. You can also get involved in community productions. College allows you to hone your skills and prepare for a professional career in the field.

A high school diploma or equivalent is typically required for most theater degree programs and many students will need a minimum GPA and SAT/ACT score depending on the school. In addition to these basic drama and theater arts program qualifications, to serve in some theater careers, special certification may be required outside of your degree.

About 61.3% of workers in careers related to theater obtain at least bachelor's degree. The chart below shows what degree level those who work in drama and theater arts have obtained. 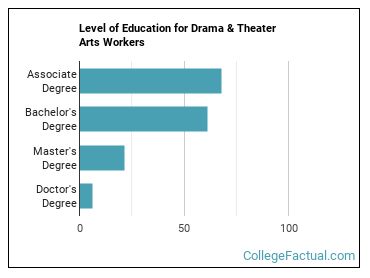 The education level required is different depending on the theater career you are seeking.

Drama and Theater Arts graduates work for a variety of companies within the performing arts field. Some graduates work with musical theater companies touring with the production, some are on Broadway, some graduates have gone into the motion picture company, and others work for performing arts magazines or venues. A degree in Drama and Theater Arts provides students with the skills to be a member of any company or organization within the acting field.

Entertainment and performing arts are growing at an average rate; however, this can be a very competitive profession in some areas. Those who are successfully typically have a lot of practice and experience under their belt.

Want a job when you graduate with your theater degree? Drama & Theater Arts careers are expected to grow 8.7% between 2016 and 2026.

The following options are some of the most in-demand careers related to drama and theater arts.

How Much Money Do People With a Theater Degree Make?

Recently graduated drama and theater arts students earned an average of $21,389 in 2017-2018. Earnings can range from as low as $11,100 to as high as $39,600. As you might expect, salaries for theater graduates vary depending on the level of education that was acquired. 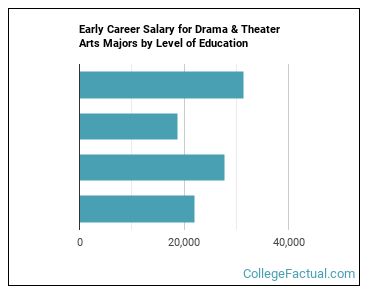 Salaries for drama and theater arts graduates can vary widely by the occupation you choose as well. The following table shows the top 5 highest paying careers theater grads often go into.

Getting Your Drama & Theater Arts Degree

With over 2,345 different theater degree programs to choose from, finding the best fit for you can be a challenge. Fortunately you have come to the right place. We have analyzed all of these schools to come up with hundreds of unbiased theater school rankings to help you with this.

One of 9 majors within the Visual & Performing Arts area of study, Drama & Theater Arts has other similar majors worth exploring.