If you enjoy creating something that allows you to connect to your audience, either through your voice, movement, designs, or images, consider a degree in Visual and Performing Arts.

Students who major in this field have a passion for the arts. They are creative and like to provide an audience with visual, auditory, and kinesthetic stimulation. Classes in topics such as drawing, painting, dance, sculpting, acting, foreign language, graphic design, photography and more allow students to develop and improve their skill in the arts.

You may choose to focus on either general Visual and Performing Arts or concentrate on Digital Arts.

General Visual & Performing Arts was the 125th most popular major in the 2018-2019 school year. Colleges in the United States reported awarding 5,720 degrees in this year alone. This is a difference of 418 over the prior year, a growth of 7.3%.

There are 307 schools offering degrees in general visual and performing arts in the United States. This year's Best Colleges for General Visual & Performing Arts ranking compares 32 of them to identify the best overall programs in the country. Continue reading to check out one of our many unbiased rankings of visual arts programs later in this article. Requirements for Getting a Degree in General Visual & Performing Arts

Students who pursue a degree in Visual and Performing Arts typically already have a passion and talent for their artistic field. They are creative and provide innovative works or performances that are unique and thought provoking. Interpersonal and communication skills are necessary in this field because you will be required to work with other artists, gallery owners, fellow performers, and the general public. These skills will also help you in selling or marketing your work.

Many artists and other professionals in the performing arts support themselves with additional jobs while they work on their art. Dancers, singers, actors and other types of artistic occupations also vary between full and part time. Those who are lucky enough to become part of a company will work full time often with irregular hours for practices and performances.

Depending on the area you decide to go into, formal schooling may not be necessary. Some people decide to pursue only an associate's degree. However, other areas of specialization require at least a bachelor's degree. It is best to look into the career you want to pursue to ensure you are meeting all requirements.

Prior Education for a Visual Arts Program

A high school diploma or equivalent is typically required for most visual arts degree programs and many students will need a minimum GPA and SAT/ACT score depending on the school. In addition to these basic general visual and performing arts program qualifications, to serve in some visual arts careers, special certification may be required outside of your degree.

There are various different levels of visual arts degrees. General Visual & Performing Arts programs offered by schools range from a associate's to a research/scholarship based doctorate, which is the highest visual arts degree you can get. Different general visual and performing arts degrees vary in how long they take.

About 55.3% of workers in careers related to visual arts obtain at least bachelor's degree. The chart below shows what degree level those who work in general visual and performing arts have obtained. 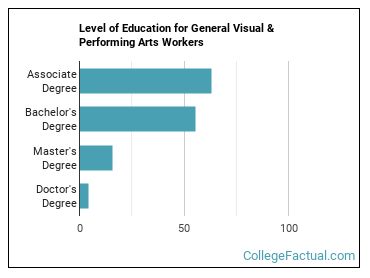 The education level required is different depending on the visual arts career you are seeking.

Visual and Performing Arts graduates are employed at in a variety of artistic careers. Graduates have pursued careers as artists, curators, fashion designers, producers, choreographers, musicians, and designers. Some graduates are working for companies, while others have started their own business or are self-employed.

The Visual and Performing Arts field is made up of multiple specializations. This can be a very competitive field, especially for full time positions.

Want a job when you graduate with your visual arts degree? General Visual & Performing Arts careers are expected to grow 4.2% between 2016 and 2026.

The following options are some of the most in-demand careers related to general visual and performing arts.

Recently graduated general visual and performing arts students earned an average of $24,726 in 2017-2018. Earnings can range from as low as $10,400 to as high as $46,800. As you might expect, salaries for visual arts graduates vary depending on the level of education that was acquired. 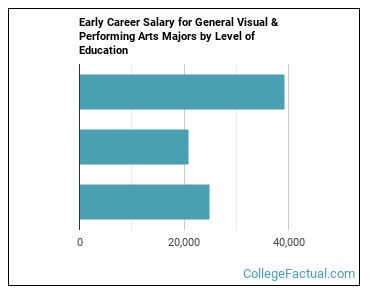 Salaries for general visual and performing arts graduates can vary widely by the occupation you choose as well. The following table shows the top 5 highest paying careers visual arts grads often go into.

With over 607 different visual arts degree programs to choose from, finding the best fit for you can be a challenge. Fortunately you have come to the right place. We have analyzed all of these schools to come up with hundreds of unbiased visual arts school rankings to help you with this.