If you prefer a career behind a lens and out of the spotlight you might be interested in Film, Video, and Photographic Arts.

A degree in this field teaches students techniques for filming scenes, producing video, and capturing the perfect picture. You will take classes in film production, lighting, video and picture editing, cinematography, and more to learn how to capture what you see on film or in photos.

When students attend college, they usually specialize in an area of this field. Concentrations include Film, Cinema, and Video Studies; Cinematography and Film Video Production; Photography; and Documentary Production.

Film, Video & Photographic Arts was the 62nd most popular major in the 2020-2021 school year. Colleges in the United States reported awarding 16,778 degrees in this year alone. This 728 less than the prior year, a decrease of 4.3%.

This year's Best Film, Video & Photographic Arts Schools ranking compares 278 of them to identify the best overall programs in the country. Explore this or one of our many other custom film rankings further below. 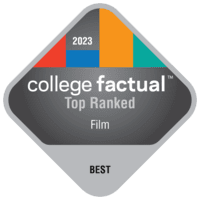 What Are The Requirements For a Degree in Film, Video & Photographic Arts

Students who are successful in Film, Video, and Photographic Arts, have what professionals refer to as 'a good eye'. They are able to capture a clip or an image in just the right way so that the audience is captivated and feels the emotion the artist was trying to evoke. Professionals are typically creative, detail oriented, and have a background in editing software.

Professionals in the field often work irregular hours, logging overtime on evenings or weekends either in an office or on location. Many photographers and videographers do contract work, so there may be periods of unemployment in between assignments.

Students interested in Film, Video, and Photography Arts should get an internship or summer job with a professional. Since positions are experience based and require students to work their way up, this experience while in school will give you a head start.

Prior Education for a Film Program

There are various different levels of film degrees. You can spend many years getting as high as a in film, video and photographic arts to something that takes less time like a . The time it takes to complete a film degree varies depending on the program.

A bachelor's degree is the most common level of education achieved by those in careers related to film, with approximately 38.3% of workers getting one. Find out other typical degree levels for film workers below.

About 60.6% of workers in careers related to film obtain at least bachelor's degrees. The chart below shows what degree level those who work in film, video and photographic arts have obtained. 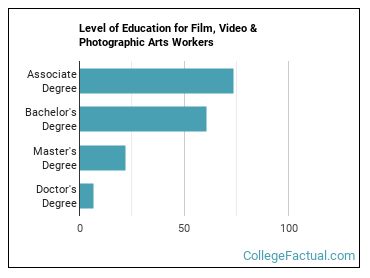 The education level required is different depending on the film career you are seeking.

Film, Video, and Photographic Arts graduates have gone to work for news studios, newspapers, television broadcast companies, advertising agencies, fashion companies, motion picture companies, or are self-employed. Graduates have the skills to be hired by any company that needs a video produced or photo-shoot.

Want a job when you graduate with your film degree? Film, Video & Photographic Arts careers are expected to grow 6.8% between 2016 and 2026.

The following options are some of the most in-demand careers related to film, video and photographic arts. 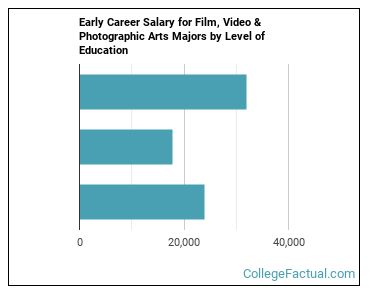 Salaries for film, video and photographic arts graduates can vary widely by the occupation you choose as well. The following table shows the top highest paying careers film grads often go into.

With over 1,278 different film degree programs to choose from, finding the best fit for you can be a challenge. Fortunately you have come to the right place. We have analyzed all of these schools to come up with hundreds of unbiased film school rankings to help you with this.

One of 10 majors within the Visual & Performing Arts area of study, Film, Video & Photographic Arts has other similar majors worth exploring.