Review current and forecasted tuition and fees for Eastern Michigan, and how these costs compare to regional and nationwide averages.

For nationwide, regional and statewide comparisons, look at the following table to see how Eastern Michigan measures up to other schools.

How Much Will Tuition & Fees Be for Eastern Michigan?

Full-time undergraduates at Eastern Michigan University were charged $13,758 in tuition and fees for the 2019 - 2020 academic year, before adjustments for financial aid. Of this amount, the cost of tuition totaled $13,658. $100 was the cost of fees. Find out more about the net price.

In contrast to public colleges, Eastern Michigan does not offer marked down fees and tuition to students who live in state.

Eastern Michigan University tuition and fees is the sum billed to students for one academic year, and does not include room and board. Having said that, a lot of students wind up spending below full tuition after receiving financial aid and other rate reductions.

How much does Eastern Michigan cost part time?

Check out the Cost Per Credit Hour page to learn more.

If costs continue to remain stable, two years at this school will run you $27,516 and four years will run you $55,032. On top of that, you may have extra costs such as room and board, books and, transportation. 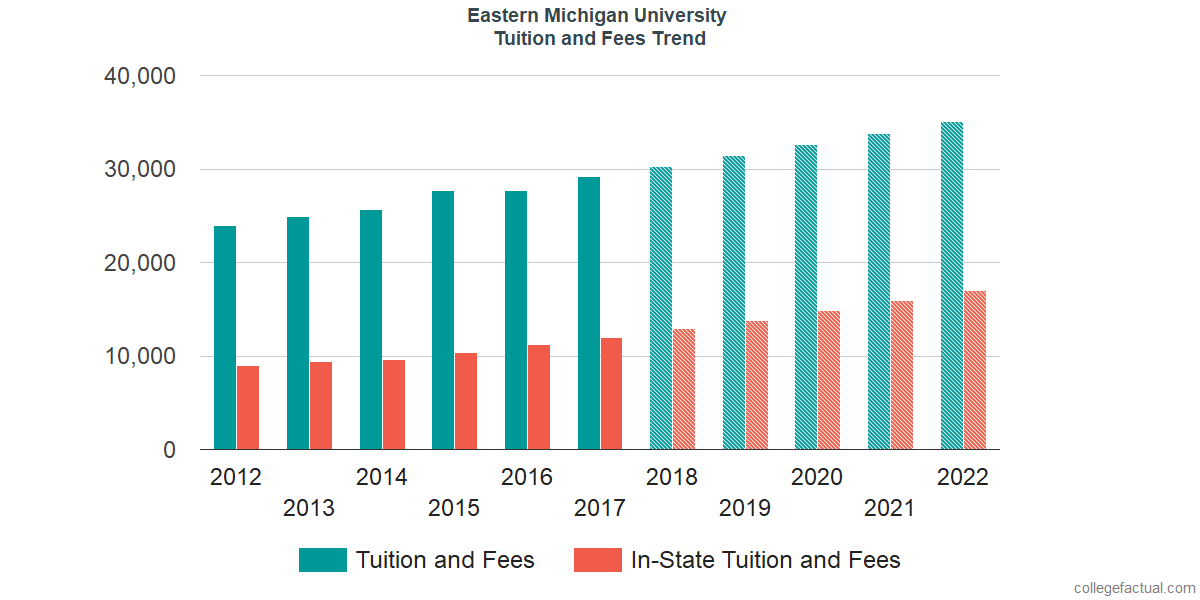 Take note of how much college fees and tuition is increasing annually. At most schools undergrads will end up spending more on their final year of college than they did for their first.

Get our answers to frequently asked questions and additional information about college tuition and fees.

Continue Your Research on Eastern Michigan