Students who major in Ethnic, Cultural Minority or Group Studies usually choose a topic to focus on such as African-Americans, Native Americans, Hispanic-Americans, women, gay/lesbian culture, and more. The program will include a combination of courses delving into the history, politics, literature and modern development of these ethnicities, cultures or groups.

A major in ethnic studies will give students a broad set of knowledge in various minority groups, what challenges they have faced throughout time and what their culture is about by studying literature, learning about their history and political leanings.

Because a major in ethnic studies is so wide-ranging, this major can lay the groundwork for you to start a career in many fields including business, teaching, sociology, diplomacy, public policy, and others. For example, you may work in business to help the company understand a cultural impact of a product you are developing. You could opt to become a high school or college-level teacher specializing in a certain area of history.

To work in a post-secondary position, you will need to have a bachelor's and possibly a master's degree or Ph.D. in ethnic studies. Other careers that can utilize your ethnic studies education will vary by the industry you work in.

A Spike in Ethnic Studies Degrees

There are 466 schools offering degrees in ethnic studies in the United States. Explore this or one of our many other custom ethnic studies rankings further below. For most careers in this field, interpersonal skills, written and oral communication and critical thinking will be important. In any position, it is critical to be able to effectively communicate with others both verbally and via written communication. The type of positions utilizing a person who studied ethnic studies will also likely need critical thinking skills. They will need to be able to evaluate cultural norms and decide for themselves what they think.

ethnic studies degree applicants generally need have finished high school or their GED. Many schools may also have GPA and SAT/ACT score minimums that must be met. In addition to these basic ethnic studies program qualifications, to serve in some ethnic studies careers, special certification may be required outside of your degree.

A doctor's degree (research / scholarship) is the most common level of education achieved by those in careers related to ethnic studies, with approximately 30.3% of workers getting one. Find out other typical degree levels for ethnic studies workers below. 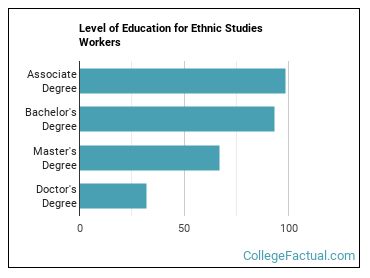 The education level required is different depending on the ethnic studies career you are seeking.

Want a job when you graduate with your ethnic studies degree? Ethnic Studies careers are expected to grow 16.7% between 2016 and 2026.

The following options are some of the most in-demand careers related to ethnic studies.

Recently graduated ethnic studies students earned an average of $27,585 in 2017-2018. Earnings can range from as low as $19,800 to as high as $41,600. As you might expect, salaries for ethnic studies graduates vary depending on the level of education that was acquired. 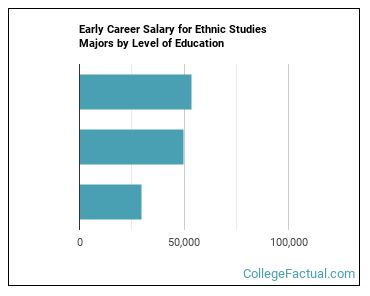 Getting Your Ethnic Studies Degree

With over 1,803 different ethnic studies degree programs to choose from, finding the best fit for you can be a challenge. Fortunately you have come to the right place. We have analyzed all of these schools to come up with hundreds of unbiased ethnic studies school rankings to help you with this.

One of 1 majors within the Area, Ethnic, Culture, & Gender Studies area of study, Ethnic Studies has other similar majors worth exploring.